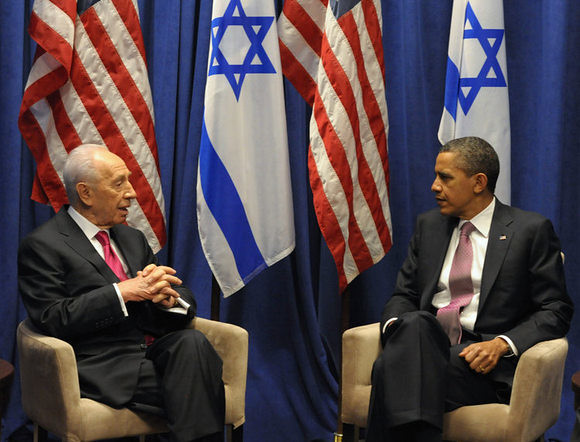 Back in 1975, at the height of the White South African Apartheid regime’s period of hubris, they were getting a lot of help in their attempts to become a nuclear power:

The “top secret” minutes of meetings between senior officials from the two countries in 1975 show that South Africa’s defence minister, PW Botha, asked for the warheads and Shimon Peres, then Israel’s defence minister and now its president, responded by offering them “in three sizes”. The two men also signed a broad-ranging agreement governing military ties between the two countries that included a clause declaring that “the very existence of this agreement” was to remain secret.

It didn’t.  The news came out in 2010, which disturbed the Israelis:

The Israeli authorities tried to stop South Africa‘s post-apartheid government declassifying the documents at Polakow-Suransky’s request and the revelations will be an embarrassment, particularly as this week’s nuclear non-proliferation talks in New York focus on the Middle East.

They will also undermine Israel’s attempts to suggest that, if it has nuclear weapons, it is a “responsible” power that would not misuse them, whereas countries such as Iran cannot be trusted.

A spokeswoman for Peres today said the report was baseless and there were “never any negotiations” between the two countries. She did not comment on the authenticity of the documents.

South African documents show that the apartheid-era military wanted the missiles as a deterrent and for potential strikes against neighbouring states.

“Shimon once described the story of the Jewish people by saying it proved that, ‘slings, arrows and gas chambers can annihilate man, but cannot destroy human values, dignity and freedom,'” Obama said as he announced the award. “He has lived those values. He has taught us to ask more of ourselves and to empathize more with our fellow human beings.”

I’m sure that your average Iranian knows about the Peres-Botha link, and being the most likely future targets of Israeli “empathy,”  I’m sure they feel Peres deserves the Medal of Freedom from the first African-American president of the U.S.

Perhaps Obama can fit in a mention of the failed South African deal in his adulatory remarks during the ceremony, when he highlights the “values” Peres has lived .

Hat Tip:  Grant Smith, whose article at Antwar.com that tipped me off about the Medal of Freedom, is really about another troubling story about Israeli duplicity and espionage:

A kryton is a gas-filled tube used as a high-speed switch. U.S. State Department munitions licenses are needed to export krytons because they can be used as triggers for nuclear weapons. California-based MILCO International Inc. shipped 15 orders totaling 800 krytons through an intermediary to the Israeli Ministry of Defense between 1979 and 1983. MILCO obtained the krytons from EG&G Inc. After the U.S. government rejected several requests for kryton export licenses to Israel, Arnon Milchan’s Heli Trading Company brokered the transactions with MILCO. Milchan is an Israeli movie producer who became successful in Hollywood for such movies asBrazil, JFK, and Pretty Woman.

The FBI file reveals that after the illicit kryton exports were discovered, a U.S. attorney tried to flip MILCO President Richard Kelly Smyth to implicate Milchan during intense plea bargaining. The gambit failed, and in May 1984 Smyth was indicted on 30 counts of smuggling and making false statements. Smyth and his wife promptly fled to Israel and remained at large until captured in Malaga, Spain, in July 2001 after Richard Smyth applied for Social Security benefits. INTERPOL arrested Smyth and extradited him to the United States, where he pleaded guilty to violating the U.S. Arms Export Control Act. In November 2001, Smyth was sentenced to 40 years in prison and fined $20,000, though he was freed within four years because of his advancing age.

Michael Cavlan Says Thank You All