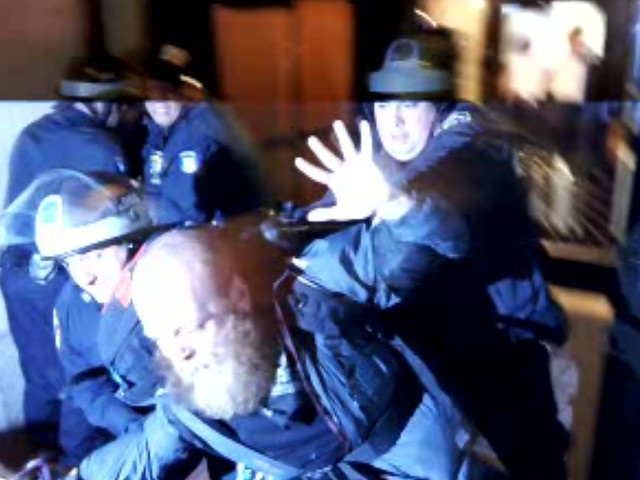 I got back from a St. Patrick’s Day Party and started watching the live stream of the police riot in New York City, as they cracked down on the six-month anniversary celebration of Occupy Wall Street.  I was watching people walking, singing, dancing and generally being civil, if loud, when the cops started rioting.

I’ve been in NYC on St. Patrick’s Day.  I’ve watched the parade stream by from grassy knolls in southeast Central Park. I watched the parade proudly march by just a short time before September 11th, 2001.  Hundreds of the cops and firefighters in that parade died that September day.

I’ve also watched the partying crowds drift away from that parade.  Hundreds and hundreds of young drunks, yelling at people,  breaking windows and pissing into trash cans over-filled with liquor bottles.

When the cops intervened in those scenes, they didn’t fucking go breaking heads through bank windows.  They cajoled, elbowed or cuffed people, with an equal combination of firmness and professionalism.

That seems to largely be gone in the NYPD of 2012.  And the way they came down hard this evening indicates that they are preparing to try to stifle the re-emergence of OWS in the rapidly warming weather.

Although other actions around the country have also recently been hassled by police, this was a peaceful, benign episode that was sternly broken up.  Where the movement originated.  There was an intended message here.

Sadly, the way this is turning, it won’t be long before the cops kill somebody.  We have to be ready to fight harder when that happens.

I covered the student demonstrations at the University of Washington after the Kent State killings for KRAB FM radio.  People fought harder then nationwide, after demonstrators were killed by adjuncts of law enforcement.  I truly hope we will do that when the inevitable happens again. With firm non-violent action.

The authorities will fight hard to keep us from communicating.

There have been several attempts by either the Obama administration or Democratic Party-affiliated organizations to suborn aspects of OWS, or to derail it when thwarted.  The latest is a snide organization called The 99% Spring.  As I predicted in January, they’ve managed to draw such luminaries as Bill McKibben into the borg.

Don’t get sucked in.

There’ll be more Obama-supporting bullshit like this being rolled out as the Obama and DLC strategies try to work the social networks, etc.

At the same time, the administration will be quietly backing legislation on the national and local levels that will try to disorganize us, make taking photographs of cops breaking the law illegal, and cutting off funding or media sources to the most outspoken of us.

They’re fucked though unless they can get hired or coerced provocateurs to create violence, mayhem or worse.

This will be The American Spring.

Thanks, Firedoglake, for being such a key element in the survival of this movement through the winter.