For the full, original article, feel free to visit the Trial by Fire.

Arizona sate employees’ unions were caught off guard this week with news that the state’s republican controlled senate was passing a series of bills which, amongst other provisions, would completely ban unions from engaging in any negotiation which effects the terms of a persons employment with state, county or city government.

The move, according to Nick Dranius of the Goldwater Institute – one of the bills shapers – is intended to “cause people to leave the unions as they recognized that unions no longer have an unfair bargaining advantage given to them by collective bargaining laws.”

Once unions are no longer legally allowed to negotiate with the state, he concludes, workers will “realize that unions don’t do much for them.”

The unions, however, may have already beat them to it.

Provisions of the bills:

Much of the inspiration for the assault on organizing rights in Arizona has come, unsurprisingly, from the State of Wisoncsin’s own successful fight to deny collective bargaining rights to state employees. One of the crafters of the bills, the Goldwater Institute, even flew Governor Scott Walker out to Arizona in November to offer counsel on how to pass similar legislation in their state.

Like the Wisconsin laws, the new legislation would prohibit unions from bargaining with the government over the terms of their employment. It would also prohibit state and local government workers from deducting money union dues from their paychecks.

The legislators in Arizona, however, have gone much further than their predecessors in Wisconsin, largely because Arizona conservatives believe – with justification – that they face far less opposition in their fight than Republican’s in Wisconsin. Because of this, they have been able to spread their attack further than Walker, who needed to at least feign support for local police and firefighters’ unions. In Arizona, no public employees union has been spared.

Further, the bills would ban government employees from deducting union dues directly from their paychecks – a feature of many modern unions rely on in order to fund their activities.

As of the release of this article, the Arizona AFL-CIO had no events in opposition to these bills published either on their website’s calendar, or in any other public capacity to this authors knowledge.

Additionally, in interviews published by Talking Points Memo, author Nick Martin noted that union leaders, “catching their collective breath,” appeared not to have any “clear or coordinated strategy about how they were going to fight [the anti-union bills].”

Indeed, with senate republicans outnumbering democrats in Arizona 21-9, the union’s were quite at a loss for how exactly to proceed. The precedents set for fighting this type of legislation has for years been to lean on the Democratic Party, whom unions donate their members’ dues money to at staggering rates.

Despite the repeated failure of this strategy to achieve even the most basic defense of union members’ livelihoods – most recently in Wisconsin, but also federally over the Employee Free Choice Act, or favorable NAFTA renegotiations – union bureaucrats have continued to put all of their eggs in the basket of government.

A Problem of organization:

For anyone even remotely familiar with the structure of unions today, however, this should come as no surprise. What are often failures for working people wind up being successes to union bosses – and what might have become great sucesses for working people often are too costly for the bureaucrats to allow.

In Wisconsin, for example, rank and file workers across the state took the initiative in the early months of that fight and led what could have been one of the most widespread, militant – and ultimately victorious – battles workers in the U.S. have seen in decades.

Had the wildcat strikes been allowed to spread – and they would have spread had the unions not so plainly worked to subvert and derail them –  union leadership would have faced a crisis.

First, they would have had to face up to the workers’ realization – in deed, if not in yet in thought – that the leadership was of no use to them.

Secondly, the leadership would have lost its partnership, and consequently its seat at the table with, the Democratic Party – who are more than happy to provide unions with a minimum of meaningless reforms in exchange for their ability to raise campaign funds and get out the vote.

Unions, at their best, should be organizations which facilitate the fight for our collective liberation. They should not be institutions of management, which dictate the course and pace of our struggles; structures which not only allow their participants’ to take the initiative, but require it. 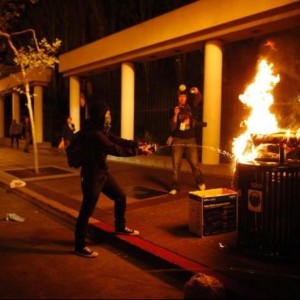