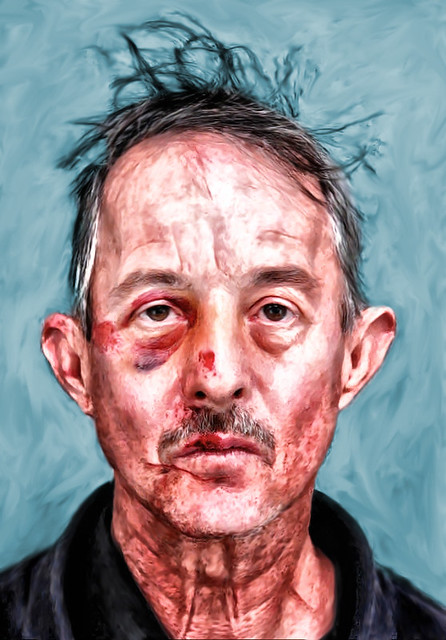 In the hallway, the homeless man in isolation screams, between obscenities, to the pepper spray SWAT team, “You’re racist!”

“I’m not precious,” says the guard, and I assume he meant to say, ‘I’m not prejudiced,’ because he says, “I don’t like nobody.”

The Hole, The Chair, And The Holding Cell: Frog Gravy 17.

It is three o’clock in the morning, and a couple of female inmates next door, as well as Meg, in this cell, are on the floor, on their bellies, taunting and tormenting Harry, who is mentally ill and housed at the end of the hallway in an isolation cell. They shout, at maximum volume, “HAAAAAAARRRRREEEEEEE!!! Want some puuuuussssyy, Harrreee?!”

Harry’s repeated requests for help reveal, on its face, Harry’s profound lack of understanding of his own surroundings.

I have never seen, nor will I ever see, during my stay in McCracken County Jail, the pathetic man we call Harry. None of us knows why he is locked up.

If the guards were to take Harry out of his cement tomb for recreation in the outside cage, we would have witnessed it, because we watch the hallway that leads directly from his cell at the end to the outside cage at the other end. We never see Harry go to rec. Christie, who had been here for seven months on my arrival had never seen him during that time either.

On my bunk, I try to think things through, although the noise is distracting. There must be thousands and thousands of Harrys locked up everywhere. Harry the person is no longer Harry the person. Harry is a bait ball in a cement cell at the end of the hallway. He is as defenseless as a child. The apex predators are hungry to hate, and they feed on Harry constantly, kicking the steel door, shouting insults every time they pass by, picking what’s left of Harry and then picking some more.

I often wonder if Harry is somebody’s father. Or son. Was he ever loved? Did Harry ever matter, to anyone? Was Harry a veteran, psychologically crippled by tours of duty? I do not know.

Why are the Harrys out there picked up, locked up, and then alternately ignored and picked on? The bullies use Harry almost exactly as they would a bar. They wander by and use him when they need him, and when they’ve had their fill, they belch, toss the glass, and move on.

There are rumors that Harry has spread feces onto the walls on the cement tomb. Perhaps this is the only thing left for Harry to do, to tell himself that he still exists.

I wonder also about Harry’s mental and physical treatment care plans. This jail has a social worker who oversees the medical needs of the mentally ill inmates. While there may be a nurse practitioner or an off-site physician signing off on the care plan and the medications, all initial requests for such must go through the social worker gatekeeper first. The sad thing is that Harrys own profound disability at the moment prevents him from filling out the initial request form on his own behalf.

This jail is not at all unique. Jails are the new ground zero for Eighth Amendment violations of the mentally ill, as I see it. Harrys are warehoused, untreated and abused everywhere. Guards have pepper sprayed Harry at close range in his cement tomb, and they have never let him out for recreation, in the time I have been here, and in the many months that Christie was here, before me. He has never passed our cell in the only hallway leading to the outside cage, for recreation.

There should be a zero-tolerance policy for inmates tormenting their fellow mentally ill inmates, and for guards abusing the mentally ill. But, it is not meant to be. Rather, Harry is shelved jailhouse prey and nothing more.

What will eventually happen to Harrys everywhere? On my bunk, I wonder these things.