The Elusive Higgs Boson Probably Has Been Discovered 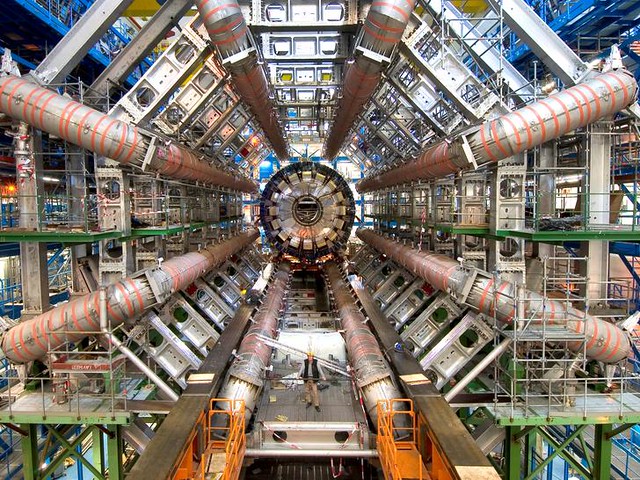 Why do I say the Higgs boson probably has been discovered?

Because today two independent teams (ATLAS and CMS), each composed of approximately 3,000 scientists and each team using a different particle detector, reported the results they have obtained from generating head-on collisions of protons traveling close to the speed of light using the particle accelerator at the Large Hadron Collider, a 17-mile tunnel 600 feet underneath the ground below the border between France and Switzerland.

Using different methodologies, each particle detector records and identifies the subatomic particles produced by the collisions.

For many months the teams have been analyzing the immense amount of data generated by their ongoing experiments searching for the theoretically predicted profile of the subatomic Higgs boson. Assuming it exists, it should be an identifiable product of a collision, although scientists believe it would decay and cease to exist almost immediately, which explains why it has not yet been confirmed to exist.

The particle is so short-lived that it can only be detected from the particles that it decays into. In the course of millions of collisions, the scientists are hunting for a significant excess of a particular combination of decay particles.

Team ATLAS reported that they found the theoretically predicted profile, or what they call a “spike” in their data, in the 116-130 GeV range (GeV = gigaelectronvolt) and the odds that the result is attributable to chance, or background noise, is 1 in 5,000.

Team CMS reported that they also found the spike in the 115-127 GeV range with similar odds.

Combining the two results, the data suggests that, assuming the Higgs boson exists, it has a mass of 124-126 GeV, or about 130 times the mass of a proton in an atomic nucleus.

A gigaelectronvolt is one billion electron volts and scientists use it as a measurement of the mass of a particle.

The odds are equivalent to 2 sigma, and in order to statistically exclude the possibility that the results are due to chance (i.e., background noise that matches the profile), the results must be 5 sigma, or better than 1 in a million. The scientists must analyze more data to reach that level of statistical certainty, but the matching results of the two independent teams are extremely encouraging and provide a basis for considerable optimism.

This is why I say the scientists “probably” found the Higgs boson.

What is the Higgs boson and why do scientists call it the God particle?

Mass is, quite simply, a measure of how much stuff an object – a particle, a molecule, or a Yorkshire terrier – contains. If not for mass, all of the fundamental particles that make up atoms and terriers would whiz around at light speed, and the Universe as we know it could not have clumped up into matter. The Higgs mechanism proposes that there is a field permeating the Universe – the Higgs field – that allows particles to obtain their mass. Interactions with the field – with the Higgs bosons that come from it – are purported to give particles mass. This is not unlike a field of snow, in which trudging through impedes progress; your shoes interacting with snow particles slows you down.

Under what is known as the Standard Model of Physics, the boson is posited to have been the agent that gave mass and energy to matter after the creation of the universe 13.7 billion years ago – leading some to nickname it the “God particle.”

I find that the following metaphorical description of the Higgs Field and the Higgs boson is particularly useful. It is used by the Exploratorium museum in San Francisco.

“Imagine you’re at a Hollywood party. The crowd is rather thick, and evenly distributed around the room, chatting. When the big star arrives, the people nearest the door gather around her. As she moves through the party, she attracts the people closest to her, and those she moves away from return to their other conversations,” the museum wrote. “By gathering a fawning cluster of people around her, she’s gained momentum, an indication of mass. She’s harder to slow down than she would be without the crowd. Once she’s stopped, it’s harder to get her going again.”

How do scientists search for the Higgs boson?

Ironically, the Standard Model does not predict an exact mass for the Higgs itself. Particle accelerators such as the LHC are used to systematically search for the particle over a range of masses where it could plausibly be. The LHC works by smashing together two beams of the sub-atomic particles called protons at close to light speed. This generates a vast shower of particles that are only created at high energies. The Higgs will probably never be observed directly, but scientists at the LHC hope that a Higgs will momentarily exist in this soup of particles. If it behaves as researchers think it will, it should decay further into yet more particles, leaving a trail that could prove its existence.

It is not the first machine to hunt for the particle. The LEP machine, which ran at Cern from 1989-2000, ruled out the Higgs up to a certain mass, and the US Tevatron accelerator searched for the particle above this range before it was switched off this year. These data are still being analysed, and could yet be important in helping confirm or rule out the particle. The LHC, as the most powerful particle accelerator ever built, is just the most high-profile of the experiments that could shed light on the Higgs hunt.

When will we know if we have found it?

As with all particle physics, this is a tricky point. The Higgs should show up in a particular range of masses, and signals that indicate it is there in the mess of particles will show up as a kind of “bump” in the data. Making sure that bump is really due to a Higgs is a different matter. If you flip a coin ten times and get eight heads, you might think the coin is somehow “loaded”. But only after hundreds of flips can you say so with the kind of certainty that physics requires for a formal “discovery”. What is clear about the LHC results so far is that the two teams working to find it do not have enough data – enough “flips” – to say that the Higgs has been found or excluded beyond doubt. More experiments will be needed for that.

Scientists anticipate they will know whether they found the Higgs boson by the end of 2012 and possibly as early as next summer.

If they have found the God particle, they will have confirmed the Standard Model of Physics and that will be a huge step forward.

The Elusive Higgs Boson Probably Has Been Discovered