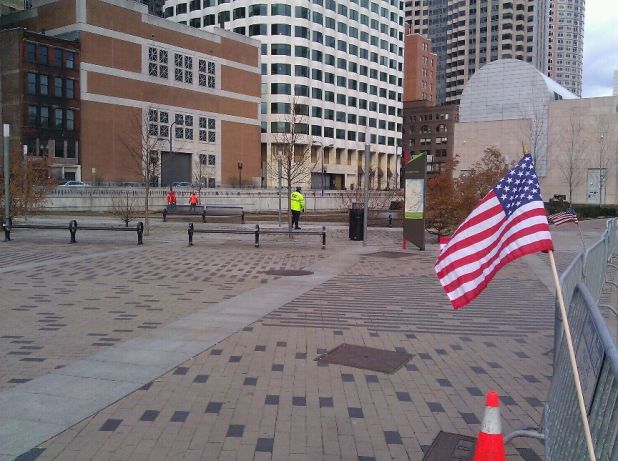 A few days back, Boston Mayor Menino told the media/public (and indirectly the court considering an injunction) that he had no immediate plans to evict the Occupy Boston folks from Dewey Park.  He just wanted the ability to do so if necessary for health/safety reasons.  He was lying, of course, or we’ve just witnessed the fastest landscape planning and permitting exercise in the history of Boston.

A mere 5 hours after a few hundred police showed up at 5:00 a.m. Saturday morning to clear all remaining Boston occupiers — arresting about 46 — and their possessions from Dewey Park, a well organized crew of about a dozen landscapers, dump trucks with new soil, a back hoe with grader and air-driven soil aerators showed up to re do the landscaping from the now totally barren park.  By the time I saw this about noon, the crew had completely regraded the area, spread new soil and were raking on piles of soil conditioners.  The back hoe filed the dump truck with excess/displaced soil.

By Monday morning or so, Dewey Park will likely be resodded with new grass, and all evidence that there was once a thriving community of people living here will have been wiped from the motorists’ view and the city’s list of things to fix.

I say motorists because Dewey Park, which lies at the end of the Rose Kennedy [Greenway], is not a place where you’re likely to see lots of people gathered, like families with kids out on a picnic or a nice walk.   People mostly don’t live there, because this is the financial district, towered over on one side by the Federal Reserve Bank of Boston and on the other side by an eclectic collection of banks (including the ugliest Bank of America building ever) and other financial towers whose well heeled occupants and corporate owners were bailed out with trillions in Federal Reserve loans and tax payer guarantees.

Oh, thousands of people walk by there every day, moving to/from the district and South Station, the city’s central public transportation hub, but almost nobody lives there or comes there to see or use the park.  You know that because just across the park, on the block in front of the financial district (extreme left in the picture), you see abandoned, shuttered storefronts that once served a neighborhood. This isn’t a neighborhood any more.

Like many contrived but little used public spaces, the main role of this parkway is to separate the dual auto expressways on each side of the strip that now covers the underground freeway buried by the Big Dig — the most expensive public works program Massachusetts ever had.  Now there was a stimulus.

The fact is Occupy Boston’s use of Dewey Park really wasn’t a serious problem for anyone except those who tried to live there.  The occupiers provided shelter, protection, food and caring not only for themselves but for all the problems experienced by the least fortunate who live in America’s cities.  And so anyone who needed those essential services naturally gravitated to the occupation for what its community could provide.

So it was no surprise that the mostly young, idealistic and courageous occupiers were forced from day 1 to recreate government, to develop mechanisms to deal, face to face with drug abuse, violent/uncontrolled behavior, unemployment, homelessness, hunger and poor health.  It wasn’t all just marches and demonstrations and rallies and teach ins; it was also a daily struggle for human and humane survival.  And the fact this was happening was also a daily embarrassment to the city and a reminder of how badly our cities fail for so many of their citizens.

The occupation movement did not create these people or their problems — those who received the trillions in bailouts were far more responsible — nor did they  exacerbate any of their conditions.  Homeless, suffering people and conditions came to the occupation, and the movement did its best to deal with them.

None of those conditions are gone merely because tents will now be replaced with freshly mowed grass that almost no one will see or walk on.   The problems and the people who struggle with them are still there, dispersed to who knows where, mostly out of sight and hence mostly out of mind.  And that was probably the unacknowledged plan that compelled the good Mayor to lie.

10:10 AM Heartwrenching tweets on the homeless. Reports indicate they were crying as police raided the camp.

Officials and daily commuters won’t have that uncomfortable reminder, now, and that will take the pressure off government at all levels to “do something.”   Oh, I’ll get the usual letters in my mailbox asking for charitable contributions to this or that, but its pretty easy to just toss those pleas and the people they represent into the trash.

This morning, the city pretended to clean up a “park” that almost nobody uses.  But in reality they tossed the most visible reminders that these vulnerable people are real, their problems are real and are still there, into huge truck-bins of trash compactors and hauled them away.  And by Monday morning, everything will look just fine again, and it will be safe to drive by or walk to work and not worry about it.