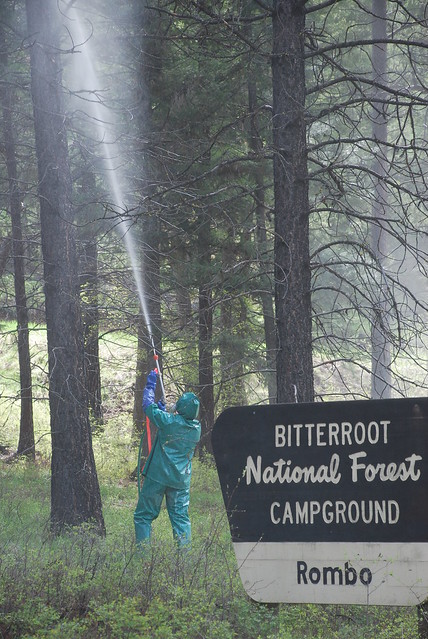 Photo by Forest Service Northern Region under Creative Commons on flickr, with description:

More information on the beetle and the epidemic.

I wrote this descriptive, generalized paper while I was in prison at PeWee Valley (KCIW), for a night Biology class, offered through the college JCTC. While I have a degree in Biology, it had been 30 years since I had taken an introductory course, so I enrolled in this class on “canteen scholarship.” It was taught by a Kentucky Department of Transportation worker who was in charge of managing the side of the roads. This is a huge job. The strips bordering the roads can mean the difference between life and death for travelers, because vines such as the pernicious kudzu can block views. Also, the instructor spoke at length about the multi-million dollar cleanup effort that Kentucky faced, after the ice storm. After his work during the day, the instructor continued in God’s work by donating his teaching to the college and to the prison inmates. It was one of the most delightful classes I have ever taken.

Unfortunately, the prison eliminated education to nonviolent Class D offenders and, in the interest of money, shipped these inmates back into the jails, where there was no hope of college education or treatment of any kind.

Because of my unusually long eight year sentence, I was not transferred with the other Class D inmates. This placed me into a Class C sort of category, and I “grandfathered in” to continue my schooling. I am thankful.

This paper is edited for this site, and I would like to hat tip my nephew Ray, who lives and works in Vail. He was a volunteer in the effort to control the epidemic, and he helped me with some articles, because I had no internet access in the prison. Ray, thank you. 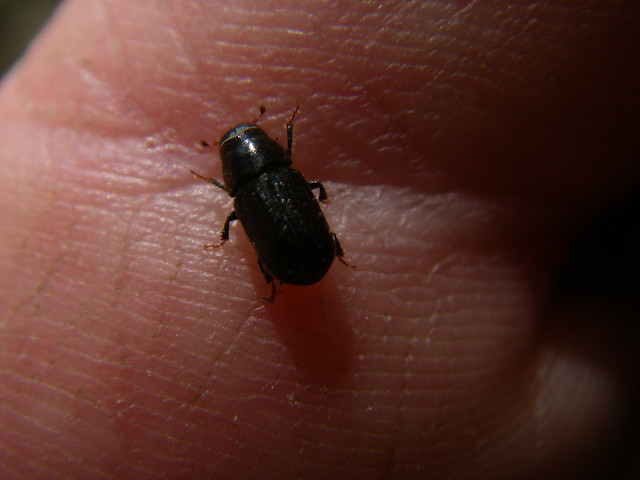 The Pine Beetle And Its Life Cycle

The Mountain Pine Beetle (MPB), Dendroctonus ponderosae Hopkins, is an insect of the largest animal Order, Order Coleoptera (beetles). Its life cycle consists of four complete metamorphic stages: egg, larva, pupa and adult. The life cycle lasts about a year, and is completed almost entirely under the bark of host evergreen trees that include ponderosa, sugar and whitepines (major), as well as limber, coulter, foxtail, whitebark, pinyon, bristlecone and Scotch pine.

The MPB larvae are parasitic herbivores with biting and chewing mouthparts; most tree damage occurs during the 10-month-long larval stage.-snip-White legless larvae feed on the host phloem tissue from August of one year to June of the next year. Fattened larvae then excavate additional cells for the pupa stage, which lasts about a month. Adults then eat and burrow an exit to the surface, whereupon they fly, sometimes as far as six miles, to neighboring tree stands, where the cycle is repeated. During this flight, often helped by winds, females secrete male-attracting pheromones, bringing more beetles and concentrating attack numbers.

The Trees And Their Life Cycle

Pine trees are gymnosperms (meaning that their seeds are not contained in fruit) that evolved long before flowering plants. A pine contains both male and female gametophytes, a tree’s equivalent to sperm and egg. Female pine cones are fertilized by small male cone pollen. An embryo encased in a seed coat develops, and is dispersed by wind or by animals.

Pine trees extract water from the soil and pull it upward, against gravity, in the xylem tissue, through transpiration- a tree’s equivalent to sweating. Photosynthesis in the needles utilizes sunlight to convert CO2 and water into sugar and oxygen. This process utilizes chlorophyll, a green molecule that is similar in structure to animal hemoglobin. Sugar then moves, in solution, from the needles to other tree parts that require energy, by way of the phloem.

Since sap-containing phloem cells contain sugar, they are a good beetle food source. When osmotic water flows into high-sugar-concentrated resin-filled cells and tissues, a balanced hydrostatic gradient is established. In healthy trees, a copious flow of sap can actually “pitch out” a beetle attack, such that the beetles drown in the pitch. The tree must not, however, be in a state of stress in order to mount this important defense.

I am presenting this in parts, because I believe the entire discussion is too lengthy for the internet.

Next: Endemic versus epidemic and conditions that favor epidemic, and the role of fire.