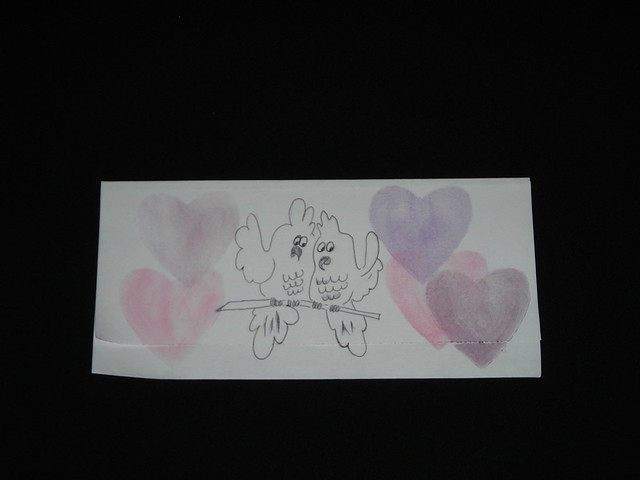 After my release, I continued my compulsive note-taking, but since I was unemployable I could not afford to buy paper, so I dove a dumpster and retrieved a spiral notebook with blank paper it it, and in the side pocket was a beautiful restaurant menu composed by, I assume, a culinary student at the local college. The chef is anonymous, but I would like to hat tip him or her and say that I enjoy the imaginary dinner from time to time in my mind.

At approximately the same time the student was composing his culinary opera, I was having Thanksgiving dinner with Lexie, Olivia and Sarah, in the penitentiary, compliments of the State of Kentucky and Aramark. I have no idea what a timbal is, but let’s say for fun that we had timbals of turkey, with unsalted mashed potatoes resurrected from a storage unit in a foreign country most likely and congealed, pearled gravy that reminded me, oddly, of either ZZ Top or my high school days in the backseat (or was it the front?) of a car. They serve everything with gravy on it, even KoolAid. /s

For the strands of orange zest, I went ahead and ate the entire orange, including the peel, because I had not had a fresh piece of fruit in nearly a year.

It took us quite a while to get to the penitentiary restaurant, where we did not have reservations, because I had to push Olivia in her wheelchair, and Olivia is surprisingly heavy. Olivia is diabetic, and had a stroke while she was in jail. The jail staff claimed she was faking it, and so she laid on the cement in her own drool and urine for like, three days, before she made it to prison. But first, they shackled her and prodded her to an awaiting van, just as they did me for my Hannibal Mammogram, only Olivia, who is eighty years old, is not quite as spry as I am, and so she fell getting into the van and permanently injured her knee.

Olivia has little use of her right side, so she cannot push her chair or bus her tray. She relies on inmates to get to and from appointments and meals, and since she is housed in the same dormitory as I am, which is Ridgeview Dormitory (the farthest dormitory from the dining hall, I might add), I will push her to this wonderful meal of thanks that we share.

Olivia has no teeth. Her face droops from the stroke, so it’s a little hard to understand her. She is in prison for forging a prescription for a dying friend, and I ask her what medication it was, and she says, “I think it might have been some red pills.”

I help to push and serve Olivia, and make sure she gets her evening diabetic snack to take back to Ridgeview Dormitory. She is indigent and cannot afford hard candy, so low blood sugar is just a risk she lives with, in prison.

Back to our culinary student.

Good grief. It’s Whole Foods on steroids. Here in prison we are on our second course: stuffing. Stuffing and cranberry sauce are the best part of Thanksgiving, and I am truly thankful because we have both. Plus, the stuffing even has flecks. If you mix the cranberry sauce with the orange peel in your mouth, you are as good as in your childhood home, with your mother’s unrivaled cornbread stuffing, made in an iron skillet with bacon grease. And oysters. I could eat a whole skillet of that, and then retire to an afternoon of walking in the woods, followed by watching college football.

Lexie is about my age, and she is mostly deaf, so you have to face her directly to speak with her, so she can read your lips. She seems to have a thyroid disorder that makes the eyes protrude a bit, the name escapes me, but it adds to her overall anxious appearance. Lexie got kicked out of drug court and is serving out a ten year sentence. Her addiction of choice was gambling and not drugs, and her original charge may have been for petty theft, but I am not sure. At any rate, during her drug court days, someone spotted her on the boat. I had no idea why it would matter that she was on a boat to start with, but apparently, in this area, they have river boats that people gamble on, and so someone called in their observation to the police, and her drug court was revoked, and now she is serving more time than she could have ever imagined, and that is, I think, ten years.

Lexie cries all the time, and she becomes so upset that she cannot complete Thanksgiving dinner with us, and so Robin, the inmate that swallowed razor blades upon admission to the prison, accompanies Lexie back to her dorm.

You know what. This guy deserves an A, don’t you think?

Sarah and I enjoy our desert of pumpkin squares, and I am planning Thanksgiving dinner for my birds as well, so I squirrel away some crumbs for my beautiful little bird troupes, and this will be the highlight of my Thanksgiving. Had I not come here, I would not have these birds to share thanks with.

Sarah killed her brother-in-law in a car accident where she was driving. Her blood analysis showed just about everything but the kitchen sink. Sarah and I will become close friends in prison. She is the one whose father will commit suicide the day after Christmas, but I will not get to spend much time with her because her sentence, three years, is so brief compared to mine.

The last item on this menu is curious.

“To-go outside later at the buses.”