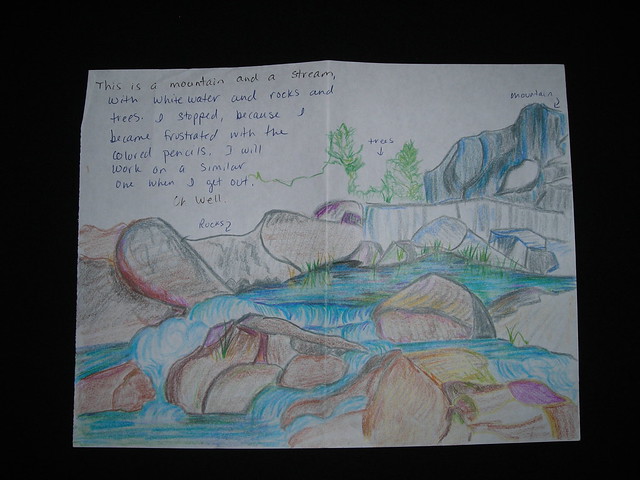 Mountain and Stream. Jail Art by Crane-Station on flickr. Colored pencil. Drawn at Ricky’s World. I abandoned this drawing because I became frustrated with the poor quality and lack of quality control in the made-in-Indonesia colored pencil set from the jail canteen.

I am randomly called to see the dentist, and so I am sitting in the dental clinic waiting area of the medical building with some other inmates who have also randomly been summoned.

Apparently this is some sort of a screening process that the prison does, because the inmate next to me says, to no one in particular, “Why am I at the dentist? I ain’t got no motherfuckin’ teeth.”

I am fantasizing about the prospect of dental care, which I rarely get these days on the outside. The last time I saw a dentist, I was in Ricky’s World; a veneer had come off the year prior. Only when the tooth was nearly unsalvageable did I get an appointment, which took all of five minutes and cost eighty-eight dollars, but first, forty-five dollars was extracted from my books for some sort of bogus protocol, where I went to the nurse and told her to please make me a dental appointment with an outside dentist.

Other than my fake release on parole and my actual transport to Ricky’s World, the trip to the dentist had been my only venture into the outside world. I sometimes wonder what it would be like to be in the dormitory in this prison that is actually located outside the gates and outside the fences. The dormitory is like a halfway house really, and it is for minimum securityy, community-level custody inmates, but inmates serving sentences all the same.

Counterintuitively, there are few escape attempts from the dormitory outside the gate, although during my stay at PeWee, one inmate did just that. She took a few steps to the nearby street, got into an awaiting vehicle, and simply left the prison one day.

There was sort of a hullabaloo about this inmate who took a left turn outside the front door of her dormitory instead of a right turn, and took a few steps to freedom instead of taking a few steps the other way for the privilege of waiting in a long line of inmates waiting to be searched and then allowed to enter the confines of the razor wire and condensed madness.

They found her a couple of days later, at the mall, shoplifting Victoria’s Secret underwear, which, if you read Hannibal Mammogram you will know would be the very last place they would have found me.

At the dentist, they only count, and record, the number of rooted, viable teeth we have. I have something less than 32, I think, but to be honest, I could care less because there is nothing they would do if I had a problem with the number of teeth in my head, unless something was rotting, in which case they would pull it, stuff the bloody hole with gauze, and send me back to my job on the prison yard. Turns out though, that the prison population has a lot of rotting teeth that get pulled, and it is usually all of the teeth.

At any given time, you can see inmates walking around with mouths full of pink gauze. State dentures cost $188.00 and entail a long waiting period, so many women adjust to eating and functioning without teeth. State dentures often do not quite fit properly, and I once heard that an inmate got a tomato seed stuck in her state dentures…and it sprouted.

I am in the habit, or compulsion really, of writing everything down, and I always carry notes everywhere I go, so that at times such as this, when I am waiting for nothing to happen somewhere, I can jot things down or read and decipher. I have this note in my pocket: 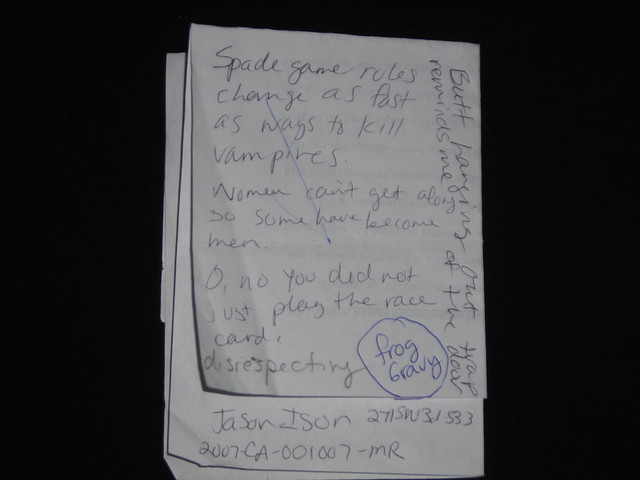 The random notes are:

O, no you did not just play the race card

Butt hanging out reminds me of the trap door

and, circled, and penned in blue are the words:

As you may know I wrote this after overhearing some classmates in Horticulture talking about the finer points of road kill preparation one day when the conversation turned to frog legs, frog drippings (honest to God) and Frog Gravy in an iron skillet. After my release, I went to the internet because if it’s on the internet it must be true, and I saw recipes for this stuff actually.

There is also the name Jason Ison and some case identifying information, and the statement “women can’t get along so some become men.”

1. Go out in the yard and dig up the biggest, fattest, juiciest worm you can find.

5. Fry in an iron skillet, and add soy sauce, and garlic salt.

6. In other pan, cook side dish of mixed vegetables fried in garlic butter.

7. When worm is done, lay worm on plate, remove vegetables from stove and lay next to worm.

You cannot make this stuff up, I swear to God.

Now I know, at this point, that Martha Stewart is about to release her prison memoir, but I guarantee she does not have this recipe in it.