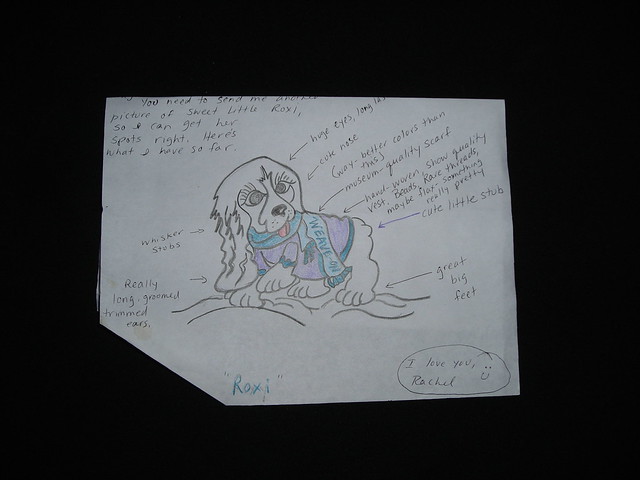 My sister’s cocker spaniel Roxi by Crane-Station on flickr. Jail art, colored pencil. My sister is a champion at the precise art of weaving, hence, “Weave-On.” A fellow inmate, who was a dog groomer, sat with me and described some of the finer points of cocker spaniels to me, so that I could do this drawing. Hence, the great big feet and the long, pretty ears. Roxi is very sweet. She is also a hot mess! Very wound up.Drawn in Ricky’s World.

At five-forty-five every morning, the fluorescent lights buzz and snap on throughout the penitentiary, and we are awakened with the cheery overhead announcement, “Goood morning KCIW, this is your five-forty-five AM wake-up call,” that sounds exactly like “Gooood morning Viet Nam,” only with different words.

My roommate, Miss Pat, a kind black lady who loves her grandchildren, and I get ready for school. Breakfast is served in the dining hall at around 6 AM, but I usually skip it and study, because early morning has always been my best study time.

I have designed a rather nice imaginary greenhouse for Horticulture, if I may say so myself, for about $34,000. It is a 28′ x 96′ “Quonst”-style, plastic (polyethlylene) covered house, with fan-and-pad cooling, nice heaters, fans and lights, and a bit of high-tech environmental control.

I chose sub-irrigation. The benches are fitted for ebb-and-flow. Water is pumped into the benches, the pots take up what they need, and then the benches drain. I even chose this irrigation method for propagation (germination) over misting, because I think misting can invite fungus problems.

I’ve read that Europe, which is eons ahead of us in horticulture, has switched to nearly 80% ebb-and-flow. In fact, what is growing (so to speak) in popularity over there is flood floors, floor benches, where the whole thing is flooded and then drained. Fertilizer and insecticide can be delivered in this way.

Mealtimes in the prison are very busy, and the dining hall is always crowded. Dormitories are called at staggered time intervals to address the crowding, but often, inmates linger after the next dorm is called in. One chair in the dining hall is elevated and cushioned and it has a sign on it that says, “Reserved for Jackie.”

I am going to burn in Hell like a twig for writing this, but when I see Jackie for the first time, I cannot take my eyes away, because she has no arms, and is eating with her feet. But I can’t help it, I am mesmerized. She can do things with her toes that I cannot do with my hands, let alone my feet. In fact, she does everything with her feet and even does unassisted outdoor work in the yard with strength and precision. Her adaptation makes me feel like a clumsy klutz.

At some point, I ask Christie (who was initially sent here after her drug court denial) why Jackie is here, and Christie tells me that she was convicted of shaking her baby to death on the outside, a case of shaken baby syndrome. At some point, in my room, when no one is around, I try to get my feet to within range of my face and I cannot do it.

I have written to the Kentucky Innocence Project and requested DNA testing for the inside and the outside of the “baggie” in my case, but my request is rejected, because I am not on death row, I suppose. 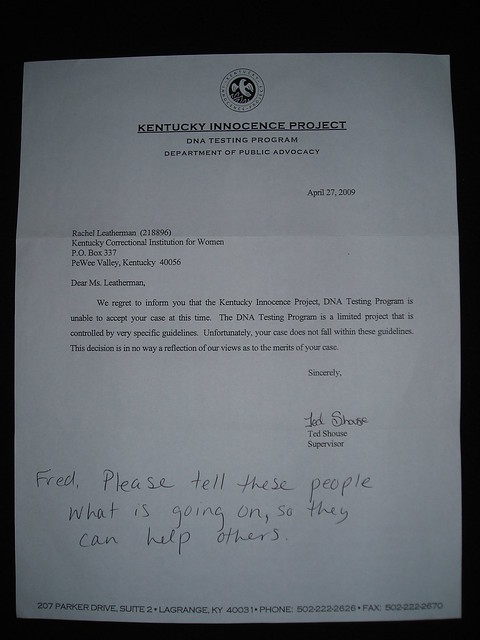 Back at school, my greenhouse is a production operation, so the benches run the length-of-house. There are five benches, three movable (rolling), so the aisle is ‘floating,’ and the aisle is just wide enough for carts- this maximizes the growing area.

After school, I am picked, for no reason whatsoever, to be the subject of guard/officer Ogletree’s (who I call “Ogre,”) torment-a-white-inmate game. She prods and insults me all the way to main laundry, and forces me to change into clothing fit for a child. Fortunately, I have spare clothing, but I am in tears all of the sudden, because for some reason, this humiliation gets to me. I speak to Officer Kennedy, a kind officer, trained in negotiation, who will go on, I believe, to be Assistant Warden at a different prison after my release. Kennedy is very helpful, and I am able to return to the dorm, to walk through the inmate insult lines and laughs, all the way back to my room.

As I said before, it would not surprise me if Ogletree spoke backward or neighed like a horse, or spoke in a combination of previously untranslated ancient languages, because she is at the least, an egregious human being.

I wanted to say to her, “Bitch, I did not invent slaves. My ancestors were poor. They farmed their own land until they lost everything.” But it would not do any good. She uses her badge to berate, belittle, and humiliate, and grievances go nowhere.

Sometimes I think I am wasting my time with God, and maybe I should just throw in the towel and worship Satan. He is winning, anyway. Why try so hard to search for God, look for the good in people, seek truths, stand up for something, and try to be a better person, when it is so easy to just join in with the Father Of Lies?