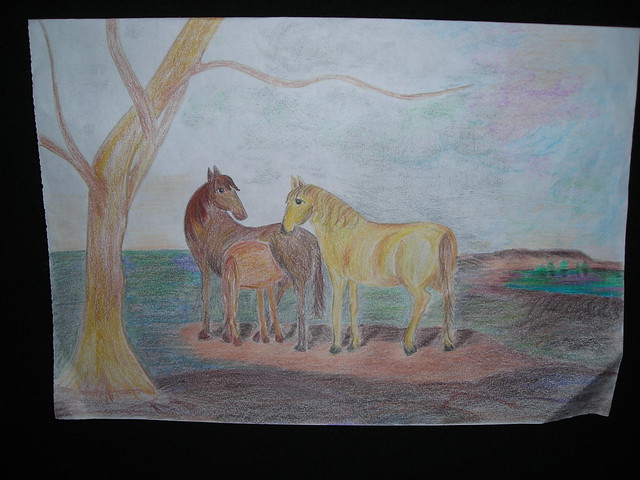 Frog Gravy is a nonfiction account of Kentucky jails and prison in 2008 and 2009, and is reconstructed from my notes.

Inmates names are changed, except for nicknames that do not reveal identity. My name is real.

Frog Gravy posts are all here: froggravy.wordpress.com, although to get to older posts will take a bit of backward scrolling through the “older entries” instruction.

Christie and YaYa have just gotten into a loud verbal fight over boobs.

Christie, who looks like Christie Brinkley, has perfect boobs, as she says, “best boobs money can buy,” and we all enjoy looking at them, and so do the Class D men working in the hallway. When Christie is in the shower, YaYa insults her for displaying her wares to the men on occasion, and Christie becomes hopping mad. She’d rather be in general population, she claims, than to be in a cell with YaYa. She pounds on the steel door.

Things calm down. It is my TV day because I cleaned the cell, and so I adjust the towel on my head, get up from my sheaf of no-shank jail notes and collection of origami cranes, and change the channel to the news.

Down the hall, Harry shouts from his isolation cell, “HELLLLP!! Let Me OUT!!! Helpmehelpmehellllp me. Please! HELP!”

In the cell, Meg gets off the phone with her trick, talking about she “got plenty of bidness,” and she and YaYa exchange family photographs with each other.

Meg, who has nine children, including six-month-old twins, says, “And that baby was tiny, only this big, but his nuts, I’m telling you, his balls hang down to his knees…and this is the older three’s baby’s daddy, and my baby’s daddy of the middle four kids, this is him, he’s 28, and my twins’ baby’s daddy is 24, and this is him. He’s mixed. The other two are black.”

YaYa says, “This is my son’s baby’s daddy, and this is my daughter’s baby’s daddy that stays with my mama, and this baby’s mama is in prison, and, I keep these. This is my family. I have to rely on my own family, you see what I’m sayin.’ You find out who your friends are when you come up in here.”

Lunch arrives, and we eat potatoes, greens, chicken and a cookie (did I mention that the food in McCracken County Jail is actually quite good?) On the TV screen we see that a group of Amish men in neighboring Graves County have been pulled over and cited for not displaying a large, reflective orange triangle on their horse-drawn buggy. They will fight the charges, because they believe the orange symbol on their buggy violates their religious beliefs and practices.

“I heard this story once,” I say. “Horse-drawn buggy got pulled over for a DUI. The driver had been drinking, and his friends loaded him into the buggy. The man spoke German and so did the horse. The man’s friends told the horse in German to go home. Seems to me the horse was sober, and the horse was the driver. Just sayin.'”

“Huh. Yeah,” I say, “There was that guy in town that was convicted of a DUI in his electric wheelchair.”

After lunch, we watch Jerry Springer on TV and Christie and I get ready for the 7:30 church service with the local faith-based treatment group, Ladies Living Free. I am hoping for placement into their residential program, as a probationary status alternative to a prison sentence. Ladies Living Free takes into account attendance records at their services, and so, Christie and I give ourselves three-and-a-half hours to prepare. We spend the afternoon doing our hair and applying makeup that we manufactured from magazine ink and FireBalls. The magazine ink, truth be told, looks better than some of the stuff I got at Sephora in Seattle, when I had money, back in the day.

Jerry Springer is hosting ‘Hillbilly Games II.’ Which means there was a Hillbilly Games I. On the screen, one obese woman says to another, “I’m gonna kick your ass, bitch,” and then they both strip off their outer clothing and get into a pool sort of affair, that has about four-and-one-half inches or so of Pork-and-Beans in it, and start whaling on each other, shouting obscenities all the while. So now, the TV is beeping a bunch, and two scantily clothed fat women fight in a child’s swimming pool of Pork-and-Beans, while some guy stands on the sideline playing the banjo.

I have seen a bunch of these shows now, during my residence here, and I’ve met people who cannot read or write and neither can their parents or grandparents, and this very jail, in fact, bans education, and no one gives a shit, unless the WalMart is closed.

Finally, in the evening, after an afternoon of meticulous preparation and homework completion, Christie and I stand at the steel door, waiting for the start of Ladies living Free.

But the start time comes and goes, and the other population cells have already been paraded past our cell and into the chapel, but we are not included in the service.

We pound on the door and a guard comes. Christie asks, “Why can’t we go to church with the others? We are going to be late.”

“It has nothing to do with the twelve steps,” says Christie. “It’s church!”

“Well good!” I say. “We’re here on drug charges, and the only twelve-step requirement for membership is a desire to stop drinking and using. They don’t discriminate.”

“You are not allowed to go.”

“Then tell them the jail will not allow our attendance so that they will not be led to believe it is us.” 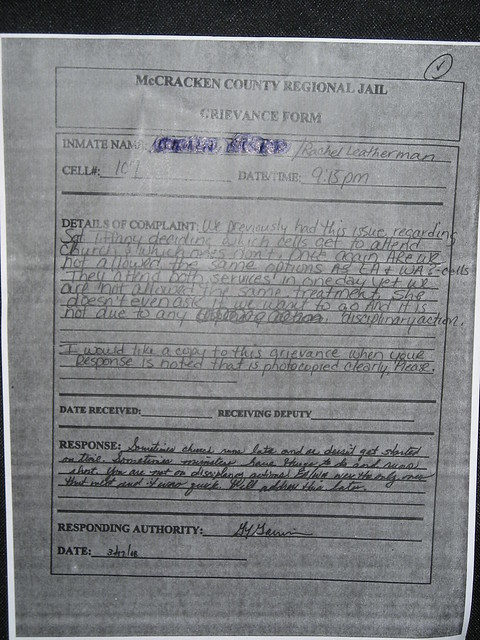 Christie and I file a joint grievance. It says:

We previously had this issue regarding Sgt. Tiffany deciding which cells get to attend church & which ones don’t Once again Are we not allowed the same options as EA and WA?-cells[?] They attend both services in one day yet we are not allowed the same treatment. She doesn’t even ask if we want to go and it is not due to any disciplinary action. I would like a copy to this grievance when your response is noted that is photocopied clearly, please.

Sometimes church runs late and doesn’t get started on time. Sometimes ministers have things to do and runs short (sic). You are not on disciplinary actions. EA/WA were the only ones that went and it was quick. We’ll address this later.

EA and WA included the entire female jail population, except for us and the isolation/hole cells.

YaYa emerges from the toilet with a wad of tissue and says to me, “Look, Rachel, a sewer fly.”

“A sewer fly. You know. A sewer fly. They comes up outa’ the sewer.” The squirming fly is about the size of these typed letters, and it is almost translucent. That means there are maggots down there.

So, I guess our disinfectant, that I used to clean the cell with this morning, is not working all that well.