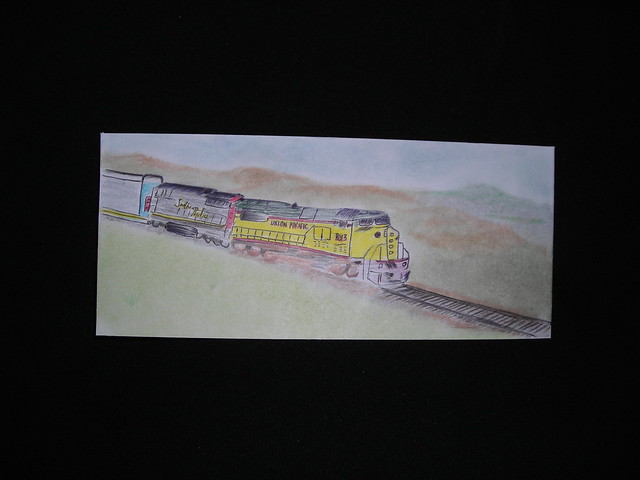 Author’s note: Frog Gravy is a nonfiction account of incarceration, first in jails and then in prison in Kentucky, during 2008 and 2009, and is reconstructed from my notes.

The end of my stay in Fulton County Detention Center (Ricky’s World) came with a notice of parole. I had hoped for this result but not necessarily had I expected it. Inmates had warned for nearly the entire year that parole on the first try is extremely rare. They told me to expect a one-year “flop,” known as a denial of parole and continued detention. Nonetheless, I had maintained a clean jail record, held steady employment, and arranged for job, counseling and a return to my supportive husband, were I to make parole.

In March of 2008, Judge Craig Clymer denied all forms of treatment and monitoring that I had arranged, that totaled nearly six years. He denied shock probation three times and, since I refused to plead guilty in my immediate case, drug court was also denied. He sentenced me to eight years, assuring the concerned jury, who voiced a desire for me to enter drug treatment, that this treatment would be offered “in the penitentiary.” I had never made it to the penitentiary, and the jails had no treatment programs. Judge Clymer’s written sentence reflected that the eight-year sentence be served as two concurrent four-year sentences.

On October of 2008 I received this notice: 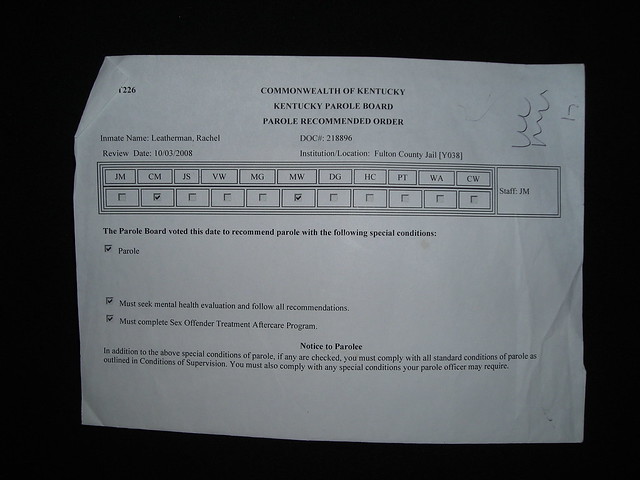 On the notice, the requirement to seek sex offender treatment was a mistake. But the rest of the order was real, and I went home to my husband on parole. As I stood outside in the sun waiting for him to arrive, I was struck by the sounds of birds, the touch of grass and the feel of the air. I conversed with another released inmate who also awaited a ride.

My husband wanted to take me out to dinner, but I was afraid to go inside a restaurant so we ordered some take out. We visited the bookstore and I picked up a copy of the 2009 Writer’s Market, because I had already done copious writing in note form, and I wanted to write about the reality of jail conditions in Kentucky.

The next day, I met with my parole officer, arranged counseling, and visited the college to see about educational programs. I attempted to meet with the man who had agreed to employ me, but he was not in. I had a required mental health evaluation. I attended a 12-step meeting.

The next morning I arose at 6 AM and went for a jog. I stayed outside for quite a while because it had been so long since I had been outside. I came home and made coffee. There was a knock on my door.

Two armed parole officers entered my home and held up a warrant, issued by Judge Craig Clymer, for my arrest. They were apologetic and almost embarrassed. One of them said he had never seen such a thing before. I was handcuffed, and I kissed my husband again, for the last time. I was jailed in the McCracken County Jail in EA, one of the two large population cells. A few days later I was shipped to KCIW, or “PeWee,” the women’s penitentiary.

Judge Clymer claimed that, after ten months, he suddenly realized that he had made an error on the written sentencing document that he called a “typographical” error. The typo had excluded an entire sentence clarifying that my eight-year sentence was two consecutive four-year sentences.

On arrival at the prison, I lost my jogging suit and every possession that I had, which was little, except for my husband’s watch that I had worn for my morning jog. Again I submitted to strip squat-and-cough searches typical of any incarceration beginning. This would be my home for the next year. Already, due to my case, I had missed my son’s last play where he was the leading role in a college play, and I had missed his college graduation, and his entrance to law school at Georgetown. My parents were elderly and not doing well and I had not seen them in years. My husband had lost his job because the law school where he taught went under. He had been evicted and moved, all without my help or support.

At the prison, I immediately took an outside job in landscape, and then set about seeing what it would take to enroll in college. Still in jail mentality, I gathered a few art supplies, but I was now busy with work and entrance testing for the college. On a couple of math aptitude tests, I was told that I scored “higher than anyone in the history of the institution,” and that was a perfect score. I scored 99the percentile in other aptitude tests, and my goal was initially to try for the legal aide program, where inmates assist other inmates with legal case work. However, the legal aide training program was eliminated due to lack of funding.

Since I was considered a Class D instead of the more serious Class C, residential treatment was not an option for me, so I signed up to attend AA meetings, twice, but was never notified that my request had been approved for meeting attendance, during my entire stay at the prison. I eventually signed up for the Horticulture program, which was excellent and enjoyable. I also took Biology at night, on a “Canteen Scholarship” that was offered because of my test scores. I became active in tutoring other inmates in math. Again, I maintained a clean record.

Horticulture was one of the most enjoyable programs I have ever participated in. The drawing that I did do now was of plants, mostly, and I drew because it helped me to memorize the plants. 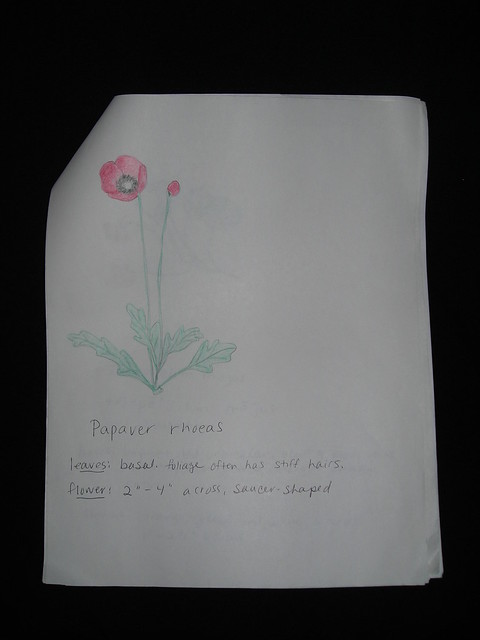 Yesterday I met with inmate records and had a conversation about my curious release on parole and then rearrest.

“How could this mistake happen?” I ask. “Why was I released and then taken back into custody with a doubled sentence, when I had work, school and counseling all in place? How could…”

“I mean, it’s unusual, isn’t it? I have never heard of this happening.”

“So, it’s common then? People just go home by mistake all the time? Please answer correctly because I am contacting the newspaper.”

The inmate records woman looked at me, shocked. She said, “We actually had one who went home, and the judge called and asked, “Why is she out, I ammended her sentence to eight years…”

“Just what I thought. That’s all I need to know.”

“You haven’t heard the rest…”

“We knew. It’s okay. I write a lot, and I wanted to get it right, about what happened here. I have no beef at all with DOC or PeWee. None at all.”

“Where are you from?”

“I did not commit this crime.”

“I am not stupid enough to think that, with 30,000 people in Kentucky locked up that some of them aren’t innocent. I will tell you this, though, that an appeal is an uphill battle.”

“But if it was me, I would stick it out until the very end.”

“Hardly anyone else would.”