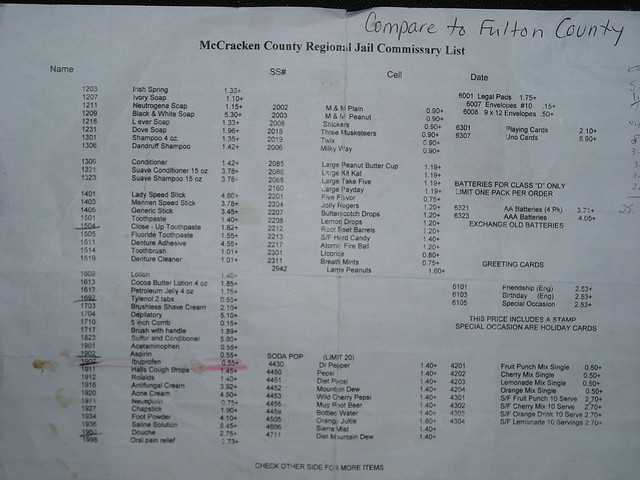 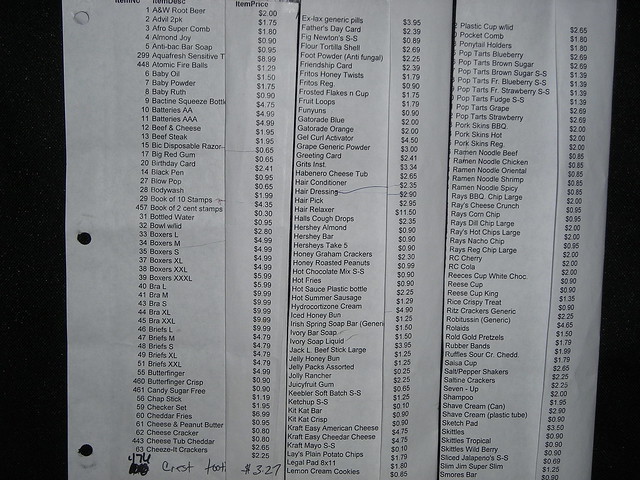 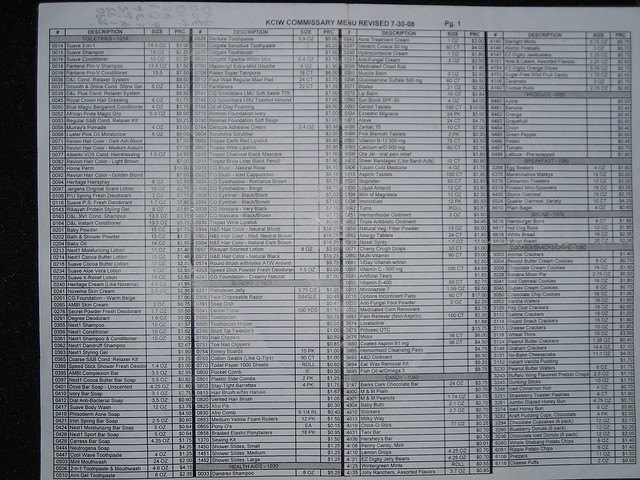 The prison commissary is a canteen, or store, where inmates purchase hygiene products, food items, stamps, paper, and pretty much everything they will use beyond the barest essentials. Jails will issue what resembles a distressed traveler kit upon admission, but nothing more, unless the inmate qualifies for indigent commissary, which is rare and limited to a few sheets of paper and a few stamps.

Prisons will discard everything that an inmate has upon admission, even if it is unopened and from another approved commissary, and the inmate must start over.

I do not know how juvenile canteen works or what is available.

Inmate commissary in this country is lucrative. Many internet articles talk about prison commissary profits.

Jail commissary is very limited. Prison commissary is not. Both venues are expensive, although the prison canteen is roughly equivalent to WalMart, at least for some items.

Here is an example of some prices. McCracken is a publicly owned jail; Ricky’s World is a private jail; KCIW is a state-run prison.

I was not allowed to work in McCracken County jail, although I was a State inmate, Class D. Their reason at the time was that if female Class D inmates worked outside jobs, say, in the community, they would likely get pregnant. So, in McCracken, I received no state pay. The burden of commissary fell to my husband and my family. I wanted to be self supporting through my own contributions, but it simply was not allowed.

In Fulton, I earned sixty-three cents per day for full time kitchen work. Although the jail was private, it did receive funding for meals. We wore bar-coded bracelets. At each meal we were scanned.

Some women worked outside jobs at charities. They were required to take their noon meal at the charity, then return to the jail to be scanned, however, they were not allowed to eat the meal that they had been scanned for.

I made about $12.60 per month in the private jail. This did not even cover phone time, and so again, expenses fell to my husband and family and again, I wanted to be self-supporting through my own contributions but it was not possible.

In prison I earned twenty dollars a month for full-time work and then later, full-time school. I commend Kentucky for this: Once we made it to prison, if we took the initiative to attend school and remain in good standing, we were paid as if we were working. Still, twenty dollars a month is not enough to live on and so, again, the burden fell to my family and my husband.

Since there is no cooking or very limited cooking allowed in the jails, the jail commissary includes nothing fresh.

In prison, I would venture to guess that if inmates quit buying Ramen noodles, the economy would collapse. I saw some of the most creative meals I have ever seen in my life, made in microwaves, with Ramen noodles as a base.

As I write this, about two and one half million Americans are locked up, and their families are being raped by corporations for canteen funds.

What, then, does the bartering economy in prison look like? What are the acceptable forms of currency now that smoking is banned? Well, stamps are probably the closest thing to cash. Phone time, just about any food item is used, with coffee, sugar and creamer being very popular.

Some inmates draw pictures on envelopes and trade these for stamps and phone time, especially if the family on the outside is poor. Also, as I have mentioned before, many women trick write. They write to men or pen pals on the outside, and the men support them. Often the support is substantial.

Inmates carry no cash and there is a monthly limit to the money put on an inmate’s books.

This is not the case today.