Bangor Daily reporting that the U.S. Census Bureau today will be releasing the latest uninsured figures today. But as it is based upon the 2010 census numbers, one wonders how accurate the numbers for Maine will be.

Especially in light of news that the insurance industry is already raising premiums beyond reach of many small rural Maine companies.

One company that left Maine but has now returned, Assurant, is now sending out expensive lil recruiting literature to all life and health (L&H) insurance agents in the state. Previously they did business under than name of Fortis, and had [landed themselves in hot water with the State of Maine Bureau of Insurance, as did the company John Alden.

Expect to see a LOT of these formerly disgraced companies coming back home to roost in Maine, thanks to LD 1333. There are many reasons they left Maine markets in the first place, and one would be wise to be skeptical of them as they return, as well as do their own research into the companies before they sign anything.

In addition to Senator Plowman’s opinion piece today where she failed repeatedly and predictably to mention her (and others) many questionable connections to ALEC and MHPC, the Bangor Daily News ran one from Rep. Walter Kumiega (D-Deer Isle).

One of those laws is the major health insurance overhaul Republicans pushed through a few months ago.

We are already seeing the negative effects of this health insurance overhaul. The Ellsworth American reported recently that some small businesses in rural Maine will be seeing their health insurance costs go up more than 60 percent as early as October.

According to the report, small businesses in Hancock, Washington and Aroostook counties will see insurance premiums rise more than 60 or 70 percent. One company in Presque Isle may see an increase of 90 percent.

Premium hikes like these will put the companies at their breaking points. A recent survey of Maine people by Market Decisions found that 21 percent fear losing health insurance coverage in the next 12 months. Nearly 40 percent of those individuals said the top reason for their fear was the new health care law passed by Republicans in Augusta.

It’s no wonder they are afraid. The insurance overhaul will allow insurance companies selling individual policies to set rates based on age at up to five times higher than the lowest rate. And, most troubling, there will be no limits on rate changes depending on where you live, or what kind of job you have.

The new law expands that ratio to 1 to 5; that is, if the lowest premium is $500 a month, the highest an insurer can now charge is $2,500. The thought is that that insurers would increase the premiums for their more costly customers while – don’t laugh at this – lowering the costs for the young and healthy.

Raise your hand if you can afford $2500 a month for health insurance. Yeah, me neither.

This caught my eye, as I was in the House gallery on May 5th during the first reading of LD 1333:

During the floor debate, I asked this question to all the lawmakers in the House: “What effect will this have on premiums for a 50-year-old, self-employed fisherman living on an offshore island?” No one answered, either because they did not know or did not like the answer.

In fact, Reps. Kumiega, Webster and Russell all had questions of their colleagues that went completely unanswered.

This is just getting started and it’s going to get much worse before it gets better. 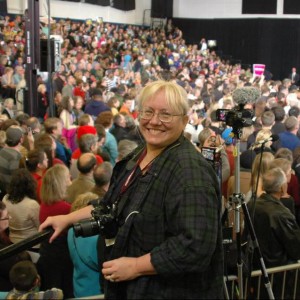