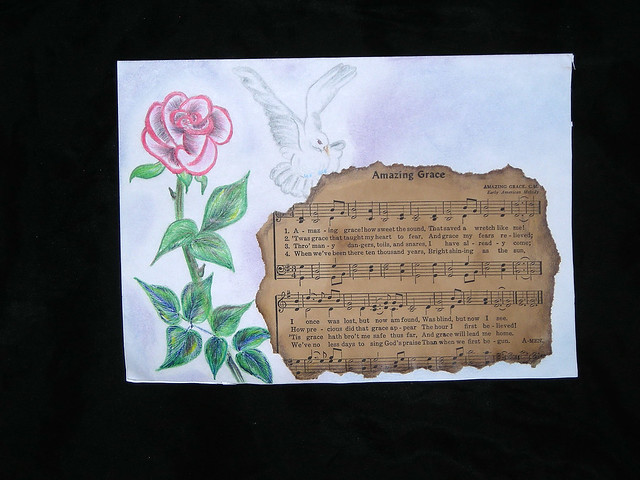 Grace. Jail art by Crane-Station on flickr. Ink, colored pencil, magazine ink, a discarded hymnal page, and coffee. I soaked the page in coffee to age it, then tore the soaked edges to make it look charred, dried out the page, and then affixed it to the background page with commissary toothpaste. Again, for the magazine ink (great stuff, I might add), put some canteen Secret deodorant onto toilet paper and then rub the magazine picture. The ink comes right off, but the ink does not look identical to the picture. You have to experiment. “Amazing Grace” seemed appropriate for today.

Author’s note: Frog Gravy is a nonfiction account of incarceration in Kentucky in 2008 and 2009, and is reconstructed from my notes.

Names are changed, except for nicknames that do not reveal identity.

However, Barkley is a real name.

Other posts are here: froggravy.wordpress.com

Today I will work alone all day, in the heavy rain. As I leave Ridgeview Dormitory, an inmate says, “Bird Lady. Look at that bird.” She points and I look.

A gorgeous male cardinal perches on the razor wire.

Razor wire stretches in every direction, inside and outside the prison. The prison itself is located in an upscale community called PeWee Valley, a suburb of Louisville. Here you have your cul de sac, and here you have your prison. Over here is the dry cleaners and the coffee shop and the bookstore, and yes, over here, the penitentiary.

The bird’s foot is almost completely amputated, hanging by skin, turned backward. He extends his wing to occasionally correct his balance, determined to make the best of the very razor wire that caused the injury. I pause to allow an epiphany to take effect, and then continue my walk to work.

On the way to recycle, where I break down cardboard boxes, I come across a large earthworm beached on the sidewalk, so I move him. Everything is, thankfully, a quarter of a mile walk or so, a walk I always enjoy.

As I pass the main building that houses laundry, Assessment and Classification (AC), library, transportation, legal aide and commissary, the most hateful reverse racist guard in the prison that I call Ogre because she is hideous, is yelling at a white inmate that I also know, who is a soft-spoken nurse on the outside. Ogre shouts, “Why don’t you just go to Hell! Why don’t you just go on back to where you came from. Get the hell out of here. Get out of my sight!” I can see that the inmate is near tears. I was also near tears one time, when Ogre screamed at me for no reason whatsoever, and forced me to put on high-water pants and clothing small enough for a child.

I would not be at all surprised if Ogre spoke backward or neighed like a horse, or spoke in a complex mixture of ancient languages and dialects.

I see my friend Lisa, who killed her brother-in-law in a drunk driving accident where she was also in possession of a vast mixture of unprescribed prescription drugs, and say hello. She has less time than me: three years, and, the day after Christmas, two days from now, her father on the outside will kill himself, but we do not know this yet.

I pass an inmate with her vested service dog in training, named Barkley. Barkley is a seven-month-old cream colored doodle. I am not exactly sure what a doodle is (golden retriever x poodle?), but Barkley is very sweet and pretty. Everyone loves him, but we are not allowed to touch him when he is wearing a vest.

At recycle, the boxes are soaked through, and soaked cardboard turns to slime, but I do not care because I love working outside.

After work, I obtain a pass, go the the library, my favorite place in the prison, and check out A Plague of Frogs: The Horrifying True Story, by William Souder, and walk back to my dorm where I speak with my first prison roommate, Ashley, before we go to dinner.

Ashley is twenty-three, six months younger than my son, and she looks like a cheerleader. She has been locked up for the better part of six years. She hears from her family about once a month or so, which I cannot imagine, but she says they are sick of her, and so she has s sugar daddy. A ‘sugar daddy’ in this instance is a male on the outside who provides financial support (often substantial) to locked up women.

Ashley says, “I’ll need about two hundred dollars to get what I need for the rest of the winter.” She flips through a clothing and accessory catalog.

Ashley has a convoluted combination of sentences that she is in various stages of serving, or serving out; I do not really understand it.

She comes from a well-off family, and in fact used to be a cheerleader and an honor student. Her family was proud of her. She had brains and beauty and had earned some type of scholarship with the University of Kentucky.

But then, Ashley was the driver in a terrible car accident where someone was killed. The victim’s family did not want Ashley to serve prison time, but the Kentucky Commonwealth sentenced her to three years at 85%. This marked the beginning of Ashley’s professional criminal career. She learned how to sell and use drugs and put this skill to use on the outside to pay bills, because no one would hire her with her record upon release. She was caught, but then smuggled drugs into jail, charged with more felonies, and so on.

Instead of spending the six years on a university education, Ashley has spent the time in various places of ‘correction’ adding to her skill set as a professional criminal, getting into trouble at one place and being shipped to another. Like me, she spent time in Ricky’s World, Fulton County, where the worst of the worst (or people who write the governor about jail conditions) are sent.

Now Ashley and I are roommates at Ridgeview. She was initially in a dormitory that is located outside the gates of the prison. (Yes, there is a dorm outside the gates of the prison that is akin to a halfway house.) But she got in trouble out there, lost her ‘community housing,’ her job and her parole possibility . All of this for a “six thirteen.”

A “six thirteen” is a write-up for sexual activity of some sort- kissing or hugging, touching or whatever, and like so many incarcerated young adult women, Ashley was not able to set aside her sexual drive, and became attracted to women.

After we talk, I go outside to stand and wait for the announcement call to dinner, and I spot the injured cardinal in a tree. The inmate cardinal is singing.

And that is when I realize that music has color.

Author’s end note: I do not know Ashley’s whereabouts today, but I believe that she is free, based on a couple of look up searches in Kentucky Online Offender Lookup.

I cannot help it: