The Corporatist Supreme Court Is Selling Out Our Democracy. 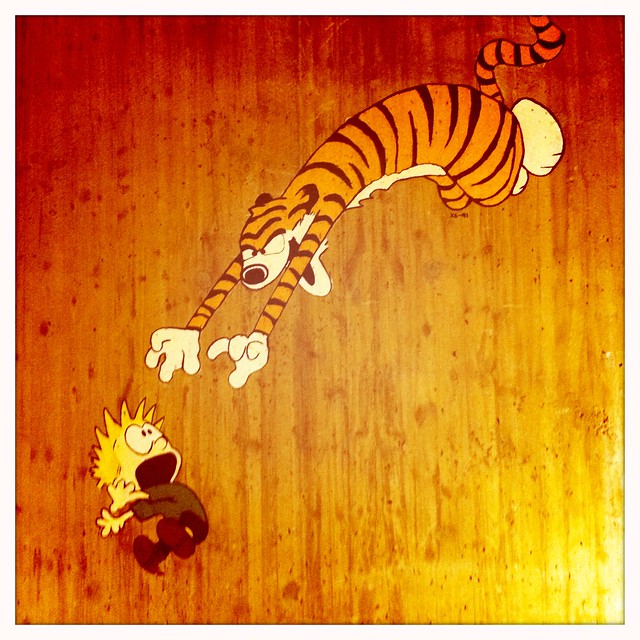 One of my core beliefs, part of my identity, had always been that the integrity of the Supreme Court of The United States was inviolable, its honor unimpugnable. The other belief, tied in to my identity as well, that had to do with being an American, was that we did not torture, because it is wrong. Tough times we’re walkin’ through just now for the naive such as myself.

Jim Hightower posted the following article in Alternet on August 5th, IMHO it is a must read, I hope I gave you just enough here to leave you no choice but to follow the link and read the whole thing, you’ll be doing yourself a favor, I promise.

Bill Watterson is Mark Twain-with a drawing pen. He is a master cartoonist, but also a sharp-witted observer of the absurd, with an impish sense of humor. From 1985-1995, Watterson penned “Calvin and Hobbes,” the truly marvelous comic strip that featured six-year-old Calvin and his stuffed tiger Hobbes. In Calvin’s inventive and iconoclastic mind, Hobbes was a genuine tiger (and his best friend) and they shared boundless adventures that challenged conventional thinking and defied authority, often crashing right through the prescribed social order of the ‘real’ world.

A recurring theme in the strip was a two-player baseball competition in which both the kid and the tiger simply made up the rules as they went. In one strip, Calvin has hit the ball thrown by Hobbes, and he’s scampering toward home plate:

Hobbes: You didn’t touch all the bases!

Hobbes: No, you didn’t. You didn’t touch seventh base.

Calvin: Yes, I did! I touched the water barrel right after the front porch.

Hobbes: That’s not seventh base. That’s twelfth base!

Calvin: I thought the garage door was twelfth.

Hobbes: The garage door is twenty-third base. You touched them all out of order, and you didn’t touch the secret base.

Hobbes: I can’t tell you. It’s a secret.

That exchange between a six-year-old and a stuffed tiger pretty well sums up the nonsensical political gamesmanship being played out today by the five-man lineup of corporatists on the Supreme Court: Chief Justice John Roberts and Justices Samuel Alito, Anthony Kennedy, Antonin Scalia, and Clarence Thomas. They are on an unrestrained ideological tear, making up their own rules to score big points for corporate power. Reasoning? Try twenty-third base! Precedent? Throw it out! History? Rewrite it! The Constitution? Slide by it! Judicial restraint? Only for liberals! Logic? That’s a secret! The rule of law? The law is us!

Only, this isn’t a game. Barely six years into Roberts’ tenure, he and his narrow majority have thoroughly politicized the Court. The one branch of our national government that was intentionally designed by the Founders to set the rule of law above politics has been turned into another political front group to advance corporate rule. The Constitution granted life tenure to the justices specifically so they could feel free to stand up to wealthy wrongdoers–particularly those avaricious business schemers who wanted to endanger the people’s rule by establishing, as Jefferson put it, “the aristocracy of our moneyed corporations.”

And staying with the theme of this post a quote (amazing how easy this is to continue doing as he mostly wrote about human foibles) from one of my favorite mostest people ever on the planet :

Stay Strong and Take Care of One Another.

The Corporatist Supreme Court Is Selling Out Our Democracy.