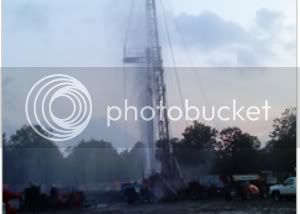 Whenever regulators try to clean up our air or water, industry issues its standard “job killer” press release. Let your children keep their asthma and we won’t shut down our (oil, gas, coal) (refinery, drilling facility, surface mine), is the general theme. No surprise, then, that a coalition of deep-well natural gas drillers responded sternly to proposed national clean-air regulations on their almost entirely unregulated industry:  ”This sweeping set of potentially unworkable regulations represents an overreach that could, ironically, undercut the production of American natural gas,” said the Marcellus Shale Coalition.

Yet the real shock in the story is that we allow energy companies take vast quantities of fresh water, add largely unregulated chemicals and force it under high pressure into deep shale beds to fracture rock and release natural gas. The gas rises back up like soda water and releases the gases it collected underground (methane) and the chemicals added by drillers, sometimes morphed by heat and pressure into something more dangerous (cancer-causing benzene).

It turns out that in 2005, the Bush Administration got Congress to exempt this “fracking” technique from federal clean air and water rules.

Here’s the result, described by a Texan living in the middle of it, as told to Propublica.com:

I live and work in south central Texas. The nations new hotspot for fracking. The enviromental destruction Fracking has caused in the last 5 years is unbelievable. The air quality in this rural area is worse than in most large cities. The wholesale destruction of the ecosystem is unimaginable. The amount of water used in fracking is irresponsible in a water scarce region.

The Environmental Protection Agency is acting to curb the smog-causing methane and other air pollutants because of a federal lawsuit by environmental groups. Its selling point for the regulation is that the drillers could actually make money by capturing and selling the methane. Conspicuously absent is any mention that methane is a far more potent greenhouse gas than carbon dioxide–though of course it’s now so unfashionable to believe in global warming, much less talk about it.

Federal regulators are still prohibited by the 2005 law from controlling the ruination of vast amounts of clean water in drought-ridden states and the contamination of drinking water. So it’s left to the states. Expectably, Pennsylvania and New York are acting. But Texas, the free-market state, will take the asthma, please, and its drillers, from Exxon down, will no doubt do all they can to cripple the federal regulations before they’re final.

See ProPublica’s pioneering series on fracking, and the damage the industry has inflicted from New York to the Southwest, here.
—————–
Posted by Judy Dugan, research director for Consumer Watchdog, a nonpartisan, nonprofit organization dedicated to providing an effective voice for taxpayers and consumers in an era when special interests dominate public discourse, government and politics. Visit us on Facebook and Twitter.

Consumer Watchdog is a nonprofit organization dedicated to providing an effective voice for taxpayers and consumers in an era when special interests dominate public discourse, government and politics. We deploy an in-house team of public interest lawyers, policy experts, strategists, and grassroots activists to expose, confront, and change injustice every day, saving Americans billions of dollars and improving countless lives.