Day of Action for the Pelican Bay Prison Hunger Strikers 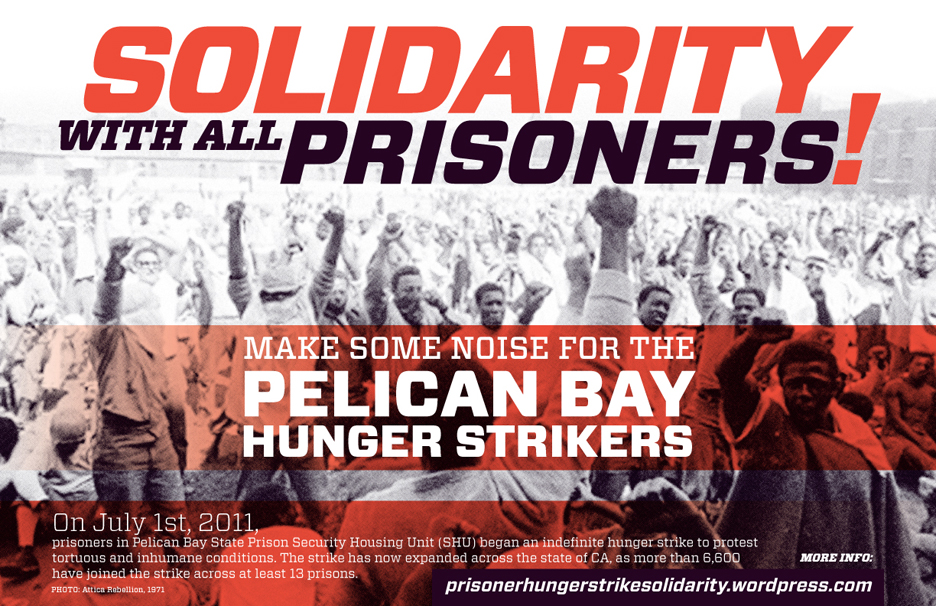 The Pelican Bay prisoner hunger strike may have concluded, but those who organized in solidarity with the prisoners and in support of their demands are not finished with the strike. A number of activists and concerned citizens from groups like the Prisoner Hunger Strike Solidarity (PHSS) Coalition and World Can’t Wait are conscious of the fact that this is most important time of all for people to take action. That is why World Can’t Wait, an activist organization dedicated to challenging and repudiating the policies of the Bush Administration, called on people to participate in a Day of Protest & Solidarity today.

The group helped to organize four actions in San Francisco, New York, Chicago, Seattle and Los Angeles to support the prisoners five core demands, which have not been met even though the hunger strike is over.

In San Francisco, activists held a rally at the state building and confronted Governor Jerry Brown and Attorney General Kamala G. Harris. In New York, activists rallied and held a speak out. In Chicago, Seattle and Los Angeles, there were gatherings or convergences to help draw attention to the prisoner’s struggle to end solitary confinement and other cruel and unusual punishment in the prison.

The five core demands of the prisoners are: end group punishment and administrative abuse, abolish the “debriefing” process [the practice of offering up information about fellow prisoners in return for better food or release from the SHU] and modify active/inactive gang status criteria, end long-term solitary confinement and comply with US Commission on Safety and Abuse in America’s Prisons 2006 recommendations, provide adequate and nutritious food and expand and provide constructive programming and privileges for indefinite SHU status inmates.

A letter from the leadership of the strike, the Short Corridor Collective, indicates why the strike was ended:

We ended the hunger strike the evening of July 20, 2011, on the basis of CDCR’s top level administrators’ interactions with our team of mediators, as well as with us directly, wherein they agreed to accede to a few small requests immediately, as a tangible good faith gesture in support of their assurance that all of our other issues will receive real attention, with meaningful changes being implemented over time. They made it clear: such changes would not happen over night, nor would they be made in response to a hunger strike going on.

The prisoners did not want fellow prisoners to die. It also stemmed from the success the strike had in garnering media attention. As the prisoners write in the letter, they had exposed the illegal policies and practices of the California Department of Corrections & Rehabilitation (CDCR) to the world. (And, in the aftermath, PHSS reports that CDCR obtained clearance to force-feed hunger strike leaders if they had not accepted CDCR’s offer.)

On August 23rd, there will be a hearing on the SHU at Pelican Bay that will be held by the Public Safety Committee of the CA State Assembly in Sacramento. PHSS and others are focused on mobilizing supporters for the hearing.

The strike began on July 1st. According to a Solitary Watch fact sheet, “6,600 inmates across the statebegan a hunger strike protesting Pelican Bay State Prison’sconditions and calling for reforms.” On July 7th, 1,700 prisoners were still refusing meals on July 7th. Support quickly spread to other prison with Corcoran and Tehachapi prisoners striking in solidarity with the Pelican Bay prisoners. By July 19th, many of the hunger strikers had lost more than ten pounds and were weak. And, by then 400 prisoners were believed to still be on strike until negotiating a “settlement” with CDCR.

There are concerns now about whether prisoners in prisons like Corcoran or Tehachapi know the strike at Pelican Bay has ended. Their inability to be informed by someone they can consider a reliable source of information for an update on the strike is troubling as many are now suffering serious health effects. There also is reason to be concerned about the possibility of retaliation.

In December, thousands of prisoners in Georgia engaged in a strike, uniting across divisions of ethnicity, age, religion, gang affiliation, geography, etc. The prisoners demanded a living wage for work, educational opportunities, decent health care, an end to cruel and unusual punishment, decent living conditions, nutritional meals, vocational and self-improvement opportunities and access to families and just parole decisions—all very basic demands that are very similar to what the prison leaders at Pelican Bay demanded.

The strike was one of the biggest prison strikes in history, but after it was declared to be over, cases of retaliation became known. According to BayView, they identified inmates that were leaders and confined some of them to isolation and transferred some of them to other detention facilities. Thirty-seven prisoners were disappeared and for a few months it was unknown where they had been rendered, though one report claimed they were in Reidsville, a place with a history of hiding people.

One inmate, Miguel Jackson, was “pepper sprayed, handcuffed and beaten with hammers, resulting in a fractured nose and 50 stitches to his face. Guards then tried to throw him over the railing from the second floor.” Corrections staff beat prisoners with hammers and they even began to allow “gang bangers” or “thugs” to beat up inmates. The “thugs” were protected from disciplinary action and sometimes rewarded with compensation.

Supporters are mobilizing to not only support the prisoners’ demands but ensure what happened in Georgia doesn’t happen to the Pelican Bay prisoners.

A call to action posted in World Can’t Wait’s website shows how grateful the prisoners are to have support outside the walls of the prison:

..The guards have been taunting the prisoners with food, and telling them no one knows or cares about them, that no one hears them.”   Lawyers and visitors who’ve been inside Pelican Bay over the last weeks say every time the hunger strikers are able to speak to “outsiders” they say again and again how much it means to them to hear about the demonstrations and vigils and actions and support outside.  One constant visitor says you cannot believe how moved these men are when you tell them about a vigil or a protest, no matter big or small.  So: we must not underestimate the importance of press coverage and engagement by supporters now.

The struggle won’t be over until alternatives to solitary confinement and cruel and unusual punishment is concerned. The supporters are dedicated to not only supporting the prisoners’ demands but also building the foundation for a real movement that challenges solitary confinement policy in all US prisons.

Day of Action for the Pelican Bay Prison Hunger Strikers