The Letter From My Son: Frog Gravy 21 [with jail art] 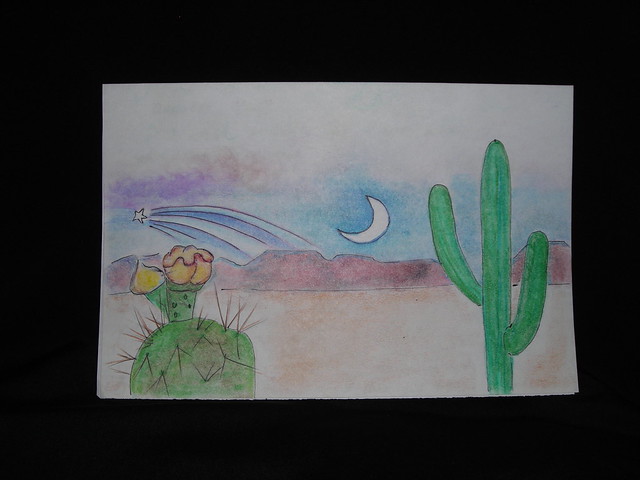 Frog Gravy is a depiction of daily life during incarceration in Kentucky in 2008 and 2009, first in jails and then in prison, and is reconstructed from my notes.

Names have been changed.

Frog Gravy posts are always originally posted here at Firedoglake in MyFDL in my diary section. They are also on a little bitty site: froggravy.wordpress.com. Bear with me over there. I am not very good with technology, so I am just figuring out what categories are. When I got out, for example, the cell phones were completely different.

When I found out about McCain’s running mate, I wrote a brief note to my son, and said, “WTF?”

“I must apologize for missing last week’s letter. I am still establishing an efficient study schedule, but if this letter stands for anything, it is for the fact that my plan is working. I managed to knock out all of next week’s reading this weekend. My friends and I came up with an apt description for the pressure of law school. It’s a bit like jogging in front of a slow moving steam roller. If you fall even remotely behind, it is a death sentence.”

“My plan is to do all of my reading on weekends while everybody else is partying. The problem is this: this week our professors laid it on a bit heavy. I think we totaled about 150 pages of reading on the week…a lot, but completely manageable. But we also have writing assignments. So, when everybody else is juggling writing assignments with the class reading the next morning, I will be able to address these writing projects free of any burdens. People will claim that pressure motivates them to work harder and more efficiently. That fact was true for me at certain points in college. The stakes are too high for that kind of pressure to be manageable. And anyway, I need the time to review black letter law books during the week.”

“My curriculum is a bit different than for standard 1Ls. I may have told you…I opted for an alternate curriculum that, to my knowledge, is only offered here at Georgetown. The curriculum is supposed to teach students not just the “what” of law, but also the “why.” We read cases and then supplement them with bits of history and philosophy. So far, the extra supplementary materials have given our readings a scholarly flair, but the one characteristic that I like most involves people. From what I understand, the curriculum attracts a more politically involved, open-minded student body…”

“I see you took notice of McCain’s running mate. All that can be said of her has been said in every venue aside from the media. In the first week after McCain announced his decision, the only thing I heard about Palin had to do with her pregnant daughter. It was maddening. Rather than take note of her spotty education and lack of experience, people seemed to be fixated on Palin’s views about her daughter’s decision to avoid an abortion. My roommate and I compared it to a situation in which an elephant lands in your living room, and everybody focuses on the fact that the elephant has a green toenail, while you stand screaming in the background that it’s a fucking elephant….aaaaaaahhh!!!”

“I listened to a radio talk show host who said that the decision was evidence of political aptitude on the part of McCain. Even in the insulation of a campaign he realizes he is losing this election. Rather than go the standard route and opt for Mitt Romney, essentially conceding defeat, he throws a hail Mary pass and picks Palin.”

“The thing that is so maddening about this situation is the fact that people cite one of her merits as involving the fact that people can relate to her….that she’s just another one of the crowd. People fail to understand that the qualities that entail good leadership naturally set people apart. We elect people because they stand out, because they presided over the editing of the Harvard Law Review and led a successful political campaign as a minority figure in a major metropolitan area and carried on their resume a whole host of other unique accomplishments…not because they had the wherewithal to drive their children to hockey practice each day like the rest of us. This election is not really about McCain anyway. He’s the “other guy.” The question in this election is whether we will elect Barack Obama or whether we will not elect Barack Obama…..I count myself fortunate enough to be in close proximity to the steps where he will take his oaths if elected.”

My son ends the letter with “Much Love.” A photograph is enclosed. I apply State-issue toothpaste, the universal jail house glue, to the back of the photograph, and stick it to the cement-block wall above my bunk. The television is airing Black Entertainment Television (BET) at maximum volume.

I return to the steel table and continue to work on a drawing, with magazine ink and commissary colored pencils that were manufactured in Indonesia by, I am fairly certain, people in an outsourced sweat shop who do not have the time or supplies to draw.

The Letter From My Son: Frog Gravy 21 [with jail art]