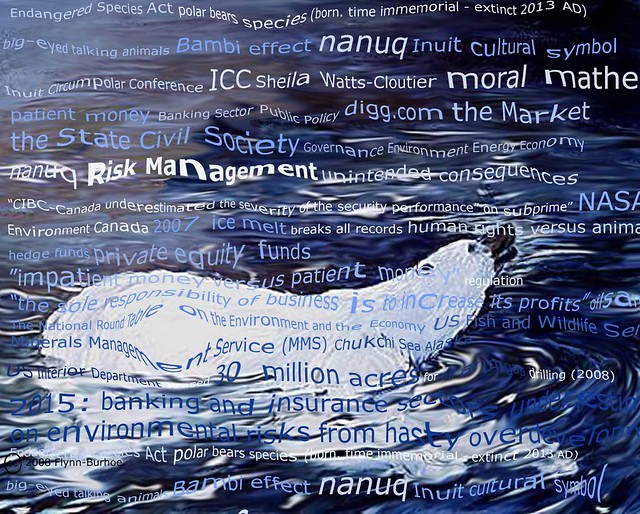 The Bush administration hounded University of Alaska ocean science  Prof. Rick Steiner into retirement.  (I know – it ended during the Obama administration, but the creaky wheels of squelching an honest voice for science began under his predecessor).  Now the Obama administration is taking this a step further, by assigning a criminal investigative team with no scientific background to go after Dr. Charles Monnett, a highly respected, Anchorage-based scientist, who works for the U.S. Bureau of Ocean Energy Management, Regulation and Enforcement. He was suspended ten days ago.

I suspect that the more agressive this investigation gets, the more political contributions will come Obama’s way from Shell Oil.  I think BP may have already maxed out what they can give him.

As in the case of Prof. Steiner, the first to come to Dr. Monnett’s defense is Public Empoyees for Environmental Responsibility.

Here is their press release (reprinted in full with PEER permission):

Washington, DC — One of the country’s top Arctic scientists is being hounded in a political attempt to impugn his observations on polar bears’ vulnerability to retreating sea ice, according to a scientific misconduct complaint filed today on his behalf by Public Employees for Environmental Responsibility (PEER) against Interior Department officials.  The scientist is now on administrative leave and forbidden from communicating with co-workers, thus disrupting a large portfolio of ongoing scientific research.

Dr. Charles Monnett, PhD, a wildlife biologist with the U.S. Bureau of Ocean Energy Management, Regulation and Enforcement (BOEM), coordinates a significant portion of all BOEM extramural research and a majority of BOEM research on Arctic wildlife and ecology.  The Interior Inspector General (IG) is apparently investigating a 2006 note authored by Dr. Monnett and a colleague published in the peer-reviewed journal Polar Biology which reported sightings of drowned polar bears in open waters following a storm.  This seven-page paper, which had undergone internal peer review, management review and outside peer review coordinated by journal editors, galvanized scientific and public appreciation for the profound effects that climate change may already be having in the Arctic.

Although the IG probe has been going on for months, Dr. Monnett was suddenly suspended on July 18, 2011, due to the IG’s “on-going inquiry.”  He has not been informed of any specific charge or question relating to the scientific integrity of his work, nor is it clear why the IG has mounted a multi-month investigation of a five-year-old journal article.  IG interview transcripts do reveal, however, that –

“Ever since this paper was published, Dr. Monnett has been subjected to escalating official harassment, culminating in his recent virtual house arrest,” stated PEER Executive Director Jeff Ruch, noting the huge economic stakes for oil companies seeking to open Arctic waters in suppressing scientific research.  “This is a cautionary tale with a deeply chilling message for any federal scientist who dares to publish groundbreaking research on conditions in the Arctic.”

Earlier this year, the Interior Department, the parent agency for BOEM, adopted its first ever scientific integrity policies designed to protect scientists from political interference.  The PEER complaint charges that officials within the IG and BOEM are violating these new policies in using Star Chamber-like tactics.

“Despite bold rhetoric about respecting science, this case illustrates that federal scientists working in controversial areas today are at greater risk than during the Bush administration,” added Ruch, pointing to heightened pressure on Alaska BOEM scientists to expedite offshore drilling approvals under President Obama.  “If Interior’s scientific integrity policies offer no protection to scientists like Dr. Monnett, they are not worth the paper on which they are printed.”

Look at his suspension order

Review history of retaliation against scientists in BOEM Alaska Office