A Woman, Her Son, And An Elderly Woman: Frog Gravy 20 [with jail art] 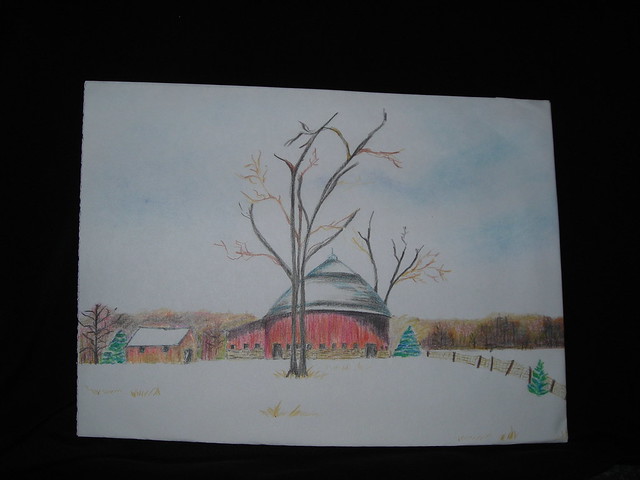 Author’s note: Frog Gravy is a nonfiction account of incarceration in Kentucky in 2008 and 2009, in jails and in prison, and is reconstructed from my notes.

Names have been changed.

Other posts are on MyFDL in my diaries, or you can go here:

I was raised Presbyterian, and we used to have a discussion group called “The Forum Hour” after the service. This is where I saw a short movie called An Occurrence At Owl Creek Bridge.

The movie is about a condemned man. He is to be hung, from a bridge. When he is dropped, the noose breaks. In the water, he loosens his hands and swims. He reaches a garden and reunites with his wife.

But it was all only a dream. The images flash in his mind, after he is dropped from the bridge and before he feels the searing pain of his neck breaking.

Here is a Wiki summary.

I often think of this man, this bridge, this dream of his, and his reality.

“It came with some bible studies. It has a bible verse on it.”

“I don’t care, they’ll take it. They took mine, and it came from my minister.”

I hide the calendar and we talk. There is absolutely nothing else to do.

Lea is a State war-on-drugs inmate. She is about my age. She has apparently been kicked out of drug court for a dirty urine. She shares with us that she has no hope any more, and that she wishes she would have not agreed to drug court in the first place, because now, she will do more time than she ever imagined.

Lea says she cannot help it, she wants to drink and use: “I hate it. I hate it because I don’t want to come up out of here like that again but I can’t help how I feel. I’ve been up in this piece of shit hole for 13 months now. I don’t want to go out and use and end up back in here but I can’t help it. When you’re stuck in this room 24/7, when they treat you like a fuckin’ animal, when you’re sittin’ here in fuckin’ pain, when you can’t sleep because your roommates are yelling all night, and it makes you want to fuckin’ scream. All that pisses you off and it’s always on your mind. I don’t know how I’m going to act when I get out. I can’t help it. When they’ve fucked you out of hours of sleep a night with the light thing…”

“The light torture?” I ask.

“Yeah, little things like the light. One night may be okay, but, say they’ve fucked you out of five or six hours of sleep a night for six months. You don’t think anything about the light, but they do it to you over and over and over.

Meg is on the phone saying, “If you come to my next court date you can slip cigarettes through the hole in the pretrial room…”

Down the hall, Harry yells from his isolation cell, “Let me out! HELP! HelpmehelpmeHELP! HELP!”

I say to Lea, “Like the cold, like never allowing recreation. Keeping us in this tiny cell with no outside time at all, month after agonizing month. Like not allowing us to even attend a single 12-step meeting.”

A few days later, Lea has a visitor. She returns to the cell after the visit, in tears.

Her visitor was her 15-year-old son. He was on the run from another state, where he was in foster care, and where he had been busted with some pot at school.

Lea tells us that her son was thin and pale, and that he did not have enough clothes to stay warm. She tries to contact some friends to see about getting the boy someplace to stay, some clothes and some food.

Lea is eventually transferred to PeWee, where she is happier. We do not hear any more. Until a while later.

Lea’s son was subsequently arrested and convicted of a violent crime. He and a couple of other teens robbed and beat an elderly woman, breaking her hip and critically injuring her. They demanded money. She told them she did not have any money. They beat her. They left her there. They returned and beat her some more.

Meanwhile, all these years later, I notice that Lea is serving out a fifteen year sentence for her original drug charges. Here is what that looks like (identifying information deleted):

I think it is ironic that Kentucky believes that beating an elderly woman nearly to death is roughly equivalent to possessing a rolling paper, a prescription blank and some pills, in terms of sentencing.

Meanwhile, her son will likely do 85% flat on eighteen, because of his violent crime.

The victim in this tragic case, the elderly woman, will likely live the rest of her life in pain.

If the elderly woman inadvertently places a pain pill into the wrong container, or if she sells a pain pill because there is no heating assistance to the elderly any more, or if she gets a pill from a friend because her Medicare has been cut off, and she is in pain but cannot afford a doctor, she will be arrested and locked up as well.

Author’s end note: I produced the drawings in Fulton County, and later at PeWee. McCracken County Jail banned all art materials as well as educational materials of any kind, unless they were expressly religious. I was also not allowed FWIW to attend any 12-step meetings whatsoever, during my stay in McCracken County Jail, even though I was serving time for a non-violent drug conviction.

A Woman, Her Son, And An Elderly Woman: Frog Gravy 20 [with jail art]