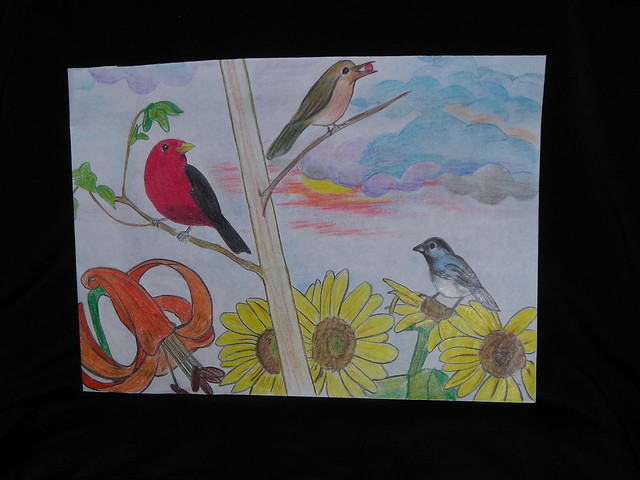 Author’s note: Frog Gravy is a depiction of daily life during incarceration in Kentucky in 2008 and 2009, first in jails and then in prison, and is reconstructed from my notes.

Other Frog Gravy posts are here on MyFDL, in my diaries, or you can go to froggravy.wordpress.com.

Names have been changed, except in this post, the name Ricky is real.

Ricky’s World is a vast improvement over McCracken County Jail,contrary to inmate urban legend. Some would strongly disagree with me. Ricky runs a tight ship. His is, for the most part, a jail that serves as a prison for Class D non-violent drug offenders. Men outnumber the women, and the jail is overcrowded.

Almost everyone is offered work, since nearly all of the inmates are “final sentenced” State inmates. There is one 12-step meeting each week. A caring priest, who is like a counselor to me and many others, visits each week.

The library is actually quite good. When family members send books to us, we are required to donate them to the library, and then check them out. One of the first books I checked out was The Hiding Place, by Corrie Ten Boom. There are history books, some educational materials, and children’s books. Since I love Mother Goose, I occasionally check out nursery rhyme books. I also become a fan of Sudoku. We can check out board games as well.

We are actually offered legitimate recreation for one hour each day. The outside cage is tiny, but it is outside nonetheless, and if you crouch and peek through the keyhole in the steel door to the outside world, you can see a cemetery.

There is another view to the outside, through a small window in the kitchen. You can even see some trees.

Lights are actually turned off at night. During the day, they are not quite as burning to the eyes as the lights are in McCracken.

We are allowed real pens. But the best part is the colored pencils. We can get them from canteen. I begin drawing nearly every day. I mail the drawings to my family. I combine colored pencil work with colors from magazine pictures. If you rub deodorant onto some toilet paper and then rub that onto a magazine picture, the ink comes off nicely and you can use it for art work. It also makes nice makeup. I find all sorts of pictures, in magazines and books, and I spend my spare time drawing, and experimenting with various items in the cell that serve as art supplies.

My hands are still raw from my first job here: washing inmate dishes in the kitchen. I am transferred to a different kitchen job: prep crew. In the evening, when the clean-up crew is finished, we go to the kitchen and fill butter and jelly cups and make Kool-Aid. Then we cut fresh vegetables.

There is no screaming man in an isolation cell, and the guards are very nice, for the most part. Some are older; we call one elderly woman “Miss Granny.”

At night, I try to invent ways to minister to my swollen hands. They are shiny, red and blistered. The guards occasionally bring me a bandaid. I carefully slice the it into two strips with a tiny scalpel that I have made from my disposable razor. Two bandaid strips last me most of the day.

I make the scalpels by stepping on the plastic razor carefully, breaking the plastic away from the blade. Then, I fold the blade until it breaks into two parts. I leave some plastic around the ends of the blade. I use the tiny instruments for sharpening pencils and separating elastic sock threads to make hair ties.. However, since they are considered contraband shanks, I keep them carefully hidden.

Bandaids are not sold on commissary; the jail wants you to fill out a “protocol.” A protocol is also known in some circles as a “medical kite,” a request form to see the medical department. When you fill out a protocol, the jail takes $45.00 off your books, and sends you to an office where you have a conversation with someone who tells you there is nothing they can do, or, it is not their department.

Sometimes, but not very often, a Tylenol is given. I have seen inmates pay as much as $90.00 for a single Tylenol tablet. I prefer Advil anyway, and it sells for $1.00 per tablet on commissary, so sometimes I splurge and get some Advil. The jail makes hundreds of dollars each month from this alone.

One woman I work with also lives in my cell. Her name is Colleen. She must weigh at least three hundred pounds, and she is very sweet. Inmates take advantage of her and make fun of her. Her hair is thinning. So is mine. I wonder about some nutritional deficiency causing accelerated aging in everyone.

Colleen is accident prone, and one day in March of this year, she slipped and fell, while working in the kitchen. She may have broken her arm, but no real doctor ever looked at it.

Now it is nearly August, and her arm is still swollen, shiny, red and painful. It looks like a great big shiny ham hock. She wakes up crying at night.

The jail will not allow Colleen to have a bag of ice without a protocol. Colleen filled out the required protocol. She paid the required $45.00, met with some staff, and returned to the cell.

The staff did not want Colleen to open the bag of ice and use the ice in her KoolAid, so they put garlic, salt and spices all over the ice and then delivered the whole mess to the cell, not realizing, I assume, that salt melts ice.

In the middle of the night, the bag leaked garlic-spice-salt water all over a couple of bunks and the whole cell reeked of garlic. Colleen got no benefit for her $45.00 bag of ice because the salt melted the ice, and Colleen was left with a plastic bag that looked like a used condom.

“What do you think?” she asks me, as she tries to wiggle a puffy, sausage-sized finger.

Colleen tries to tell the staff that she cannot work, and they threaten to put her in the hole if she does not work. Somehow, she fashions a sling from a t-shirt, comes to work, and asks me to whip the jelly for her, so that the jelly will be liquefied and she can use one hand to dip the jelly into jelly cups.

Fiona has some psychiatric issues that I have narrowed down to either borderline or Munchausen’s; I have not decided yet.

As we are cutting cucumbers, Fiona says, “I don’t know why they let me have knives. I put a butcher knife into my mother because she wouldn’t let me watch Rin-Tin-Tin on television.”

But she has a severe speech impediment, so the sentence comes out, “…I put a butchow knife intow my mothow…”

And I think, I am living in an insane asylum.