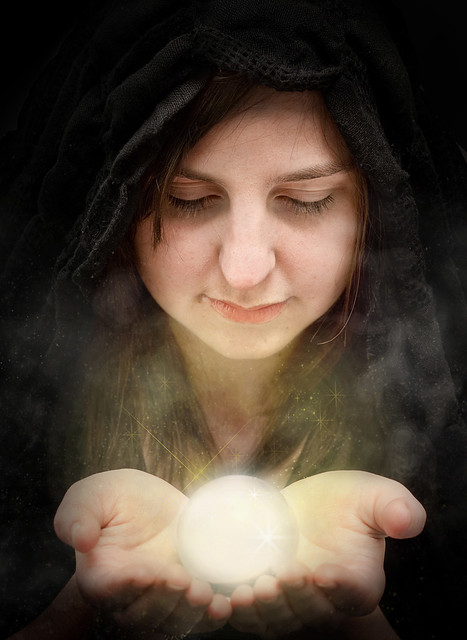 The Fortune Teller ~from Aussiegall~
(with Thanks from Flickr.com)

I couldn’t sleep last night. So I  stumbled to the den, found a book, and turned on the radio in the background. What came on was a replay of  The Thom Hartmann radio show from earlier in the day. Not something I usually would listen to, while I must confess to having once been a fan, and owning a couple of his books; his active role as an unrelenting apologist for our current President raises my blood pressure to unsafe heights.

I put my book down, pondering whether I possessed the gumption to go make a snack and pour a stiff drink, just in time to hear a caller telling Thom about the following passage from a book with a copyright date of 1997.

The book is titled “The Fourth Turning”, An American Prophecy. I called around today and found it at a used book store and went and purchased it. The following is a passage from page #273 :

An impasse over the federal budget reaches a stalemate.

The president and Congress both refuse to back down, triggering a near-total government shutdown.

From Business Insider’s ClusterStock Chart of the Day Column :

In addition to the stock carnage today, the most alarming action was at the short end of the yield curve, where rates have basically hugged the 0%-line for ages.

Here’s a look at 2-year Treasury futures (via CME), which fell notably today, before bouncing back (marginally).

People are worried about getting paid.

From MSNMoney  8 days of the Dow Jones Industrial Average :

Meanwhile the sharp decline in the dollar since the beginning of the year and the possibility of a US debt default has raised the eyebrows of central banks around the world.  The PBoC and other central banks including Russia have most likely accelerated their diversification out of U.S. dollars in anticipation of a downgrade or default.  However they also have to be careful because a weak dollar drives up the value of their own currency which means some sort of buying needs to be maintained to cap the rise in local currencies and to manage foreign exchange pegs.  As a result, even if the U.S. loses its AAA rating, a buyer strike in U.S. Treasuries is unlikely.

For your estimable consideration FireDogs, I found it interesting. How ’bout you guys?