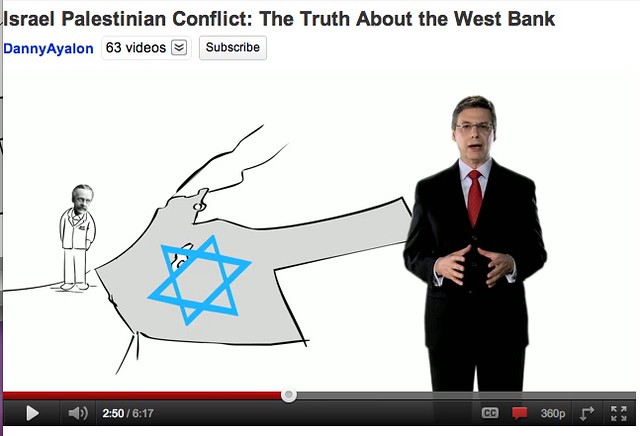 There he is, Deputy Foreign Minister of Israel, Danny Ayalon, standing next to a map with a huge Star of David plastered over Jordan, with the middle of the unambiguous light blue symbol of a nation, splashed on top of Amman, the capital of the nation of Jordan.  The little cartoon guy, standing in the northeastern Sinai, is Lord Arthur Balfour, who Ayalon seems to think had the capability of delivering Amman to a Zionist state.

Ayalon posted  a YouTube on July 12th at his site, DannyAyalon, a site administered by the Israeli government.  In it, he seems to purport that the Balfour Declaration of 1917 was a legally binding governmental decision by Great Britain, to deliver all of the post-World War I territory that became known as Mandatory Palestine, and all of the territory which became known as Mandatory Transjordan to some entity which didn’t yet exist, representing Zionist aspirations.  Here is the entire text of  Lord Balfour’s letter to British banker and political activist, Lord Rothschild:

Dear Lord Rothschild,
I have much pleasure in conveying to you, on behalf of His Majesty’s Government, the following declaration of sympathy with Jewish Zionist aspirations which has been submitted to, and approved by, the Cabinet:

“His Majesty’s Government view with favour the establishment in Palestine of a national home for the Jewish people, and will use their best endeavours to facilitate the achievement of this object, it being clearly understood that nothing shall be done which may prejudice the civil and religious rights of existing non-Jewish communities in Palestine, or the rights and political status enjoyed by Jews in any other country”.

I should be grateful if you would bring this declaration to the knowledge of the Zionist Federation.

The Israeli foreign office seems to be creating their impression of very wide borders given to Israel (not referred to in the above letter) on subsequent events, rather than upon the letter itself, which was only, as it explains, a declaration of sympathy, not a commitment that might be construed as legally binding.  The declaration is referenced in some post-World War I treaties:

The “Balfour Declaration” was later incorporated into the Sèvres peace treaty with Turkey and the Mandate for Palestine.

The letter was basically a political document.  As UCLA history professor James L. Gelvin has written:

The British did not know quite what to make of President Woodrow Wilson and his conviction (before America’s entrance into the war) that the way to end hostilities was for both sides to accept “peace without victory.” Two of Wilson’s closest advisors, Louis Brandeis and Felix Frankfurter, were avid Zionists. How better to shore up an uncertain ally than by endorsing Zionist aims? The British adopted similar thinking when it came to the Russians, who were in the midst of their revolution. Several of the most prominent revolutionaries, including Leon Trotsky, were of Jewish descent. Why not see if they could be persuaded to keep Russia in the way by appealing to their latent Jewishness and giving them another reason to continue the fight?” … These include not only those already mentioned but also Britain’s desire to attract Jewish financial resources.

But the declaration does not mention the borders Minister Ayalon is standing before, clearly held under the authority of the symbol of his government.  Perhaps Ayalon’s basis is this, a memorandum from Lord Balfour to Lord Curzon on August 11, 1919, when Balfour’s position in the British government was as Lord President of the Council, and Curzon was the incoming Foreign Secretary:

The contradiction between the letters of the Covenant [of the League of Nations] and the policy of the Allies is even more flagrant in the case of the ‘independent nation’ of Palestine than in that of the ‘independent nation‘ of Syria. For in Palestine we do not propose to even go through the form of consulting the wishes of the present inhabitants of the country though the American [King-Crane] Commission is going through the form of asking what they are.

The Four Great Powers [Britain, France, Italy and the United States] are committed to Zionism. And Zionism, be it right or wrong, good or bad, is rooted in age-long traditions, in present needs, and future hopes, of far profounder import than the desires and prejudices of the 700,000 Arabs who now inhabit that ancient land. In my opinion that is right.

What I have never been able to understand is how it can be harmonized with the [Anglo-French] declaration, the Covenant, or the instruction to the [King-Crane] Commission of Enquiry.

I do not think that Zionism will hurt the Arabs, but they will never say they want it. Whatever be the future of Palestine it is not now an ‘independent nation’, nor is it yet on the way to become one. Whatever deference should be paid to the views of those living there, the Powers in their selection of a mandatory do not propose, as I understand the matter, to consult them. In short, so far as Palestine is concerned, the Powers have made no statement of fact which is not admittedly wrong, and no declaration of policy which, at least in the letter, they have not always intended to violate.

If Zionism is to influence the Jewish problem throughout the world Palestine must be made available for the largest number of Jewish immigrants. It is therefore eminently desirable that it should obtain the command of the water-power which naturally belongs to it whether by extending its borders to the north, or by treaty with the mandatory of Syria, to whom the southward flowing waters of Hamon could not in any event be of much value.

For the same reason Palestine should be extended into the lands lying east of the Jordan. It should not, however, be allowed to include the Hedjaz Railway, which is too distinctly bound up with exclusively Arab Interests. [emphasis added]

This memorandum is probably the basis of Ayalon’s claim that Israel has been generous in not claiming ownership of at least most of the present nation of Jordan.

This is just one of the strange aspects of Ayalon’s quite meretricious video.  Some of you may spot others, but I have a busy day.  Forgive me for putting you through the music that accompanies this false piece of propaganda:

Objection to the content of the video has not been wide yet, but at a Mondoweiss article about this and other annexationist propaganda over the past few days, a British translation of a long classified Israeli legal opinion on the legality of West Bank settlements was linked to. Like my research above, it clearly refutes what Ayalon is trying to get across.

What other errors can you spot in Deputy Foreign Minister Danny Ayalon’s video? 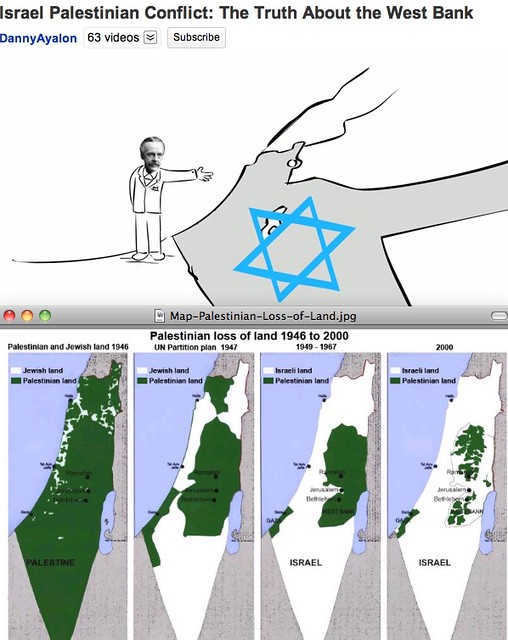