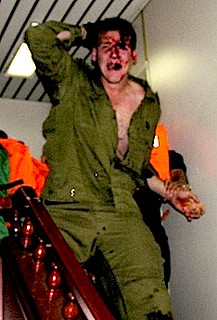 I. Last year, on the night of May 29-30, as the Gaza bound flotilla headed by the Turkish cruise ship, MV Mavi Marmara, approached the coast of the eastern Mediterranean, firedoglake was able to provide the best real time coverage of the interception and boarding of the vessels.  I had started a live blog diary on the evening of the 29th, at MyFDL‘s predecessor, The Seminal.  Siun was able to take over, with a front-page diary.  Reading back through those diaries now sends a chill down my back:

Israeli Warships Try To Block Wheelchairs and Schoolbooks for Gaza

In 2010 there wasn’t as much attention being drawn to the flotilla as there seems to be this year.  For sure, the mainstream media is avoiding it as best possible, but the depth and width of discussion of the issues surrounding the perceived need for the 2011 flotilla in alternative media is heartening.  There are many reasons for this.

A case in point is Glenn Greenwald’s interest in the flotilla today.  His essay, U.S., Israel escalate threats against flotilla, including U.S. citizens, concentrates partially on the subject matter of my Saturday MyDFL diary, Obama Administration Threatens to Jail 87-year-old Holocaust Survivor, Others – Updated X 2.  The U.S. State Department warnings to Americans on the Gaza flotilla on Wednesday and Friday last week were just the sort of idiocy Greenwald assails best:

The perception that Clinton endorsed possible Israeli violence against Americans is bolstered by the conduct of the U.S. Government in the wake of Israel’s attack on the prior Gaza flotilla, when Israel killed 9 people, including the unarmed 19-year-old American citizen (and Turkish citizen) Furkan Dogan.  While most governments instinctively condemn the killing of their own unarmed citizens by foreign armies — Turkey was furious at Israel for months and world leaders in virtual consensus harshly condemned the Israeli aggression — the Obama administration almost immediately took Israel’s side, culminating with Joe Biden’s disgusting rhetorical question, posed before the American teenager was even buried: “what’s the big deal here”?

The United States on Friday warned activists against plans to send a new aid flotilla to challenge Israel’s blockade of the Gaza Strip, saying it would be irresponsible and dangerous. . . . “We underscore that delivering or attempting or conspiring to deliver material support or other resources to or for the benefit of a designated foreign terrorist organization, such as Hamas, could violate U.S. civil and criminal statutes and could lead to fines and incarceration,” [State Department Spokesperson Victoria] Nuland said.

Greenwald also is incensed (as am I) that a former Bush speech writer, Joshua Treviño, appears to be cheerleading for the IDF to kill Americans in the flotilla.  Though some blog commentators and commenters see this as something new, a measure of last ditch desperation, it is not.  There have always been some Americans whose blind support for Israel pushes them over edges.  For instance, last year, in response to the 2010 flotilla debacle, Jennifer Rubin wrote at Commentary:

if you are not with Israel, you are against her. And if you do not oppose with every fiber of your being and every instrument at your disposal that which intends the Jewish state harm, you are enabling her destroyers.

Creepy, huh?  Rubin is often like that.  Perhaps this is part of why she got a job five months after that article at Commentary, at the Washington Post.  Where she continues to be, uh, creepy.

II. Part of the reason for heightened interest in the 2011 flotilla is that the eastern Mediterranean of 2011 is different from that of a year ago.  To the south of Israel and Gaza, Egypt is in the midst of throwing off decades of misrule by Gen. Mubarak.  To the direct north of Israel, Hezbollah is a more powerful force in Lebanese politics than they were in 2010.  And to the north of Lebanon, Syria is in upheaval that may lead to the demise of a regime even more onerous than that of Mubarak.  The same tools we saw used by 2010 flotilla  participants – blogs, facebook, twitter and cell phones (with their cameras) – were used extensively in the events in Tunisia, Egypt, Bahrein and Syria.

On the surface it may seem that the events in Tunisia and Egypt are far more important than any issue the Gaza flotillas may actually be able to determine.  However, both Egyptian and Israeli efforts to ease aspects of the siege of the world’s biggest open air prison camp can be partially credited to the heightened knowledge of what is happening in Gaza by the coverage of last year’s, and of this year’s flotillas.

The coverage Monday morning by Democracy Now, of flotilla preparations at the port of Piraeus, just south of Athens, which is in almost as much turmoil as Cairo was in February, showed that the kind of activism against the borg which the flotillas represent, is resonating in many settings:

So, in a sense, in 2010, the flotilla movement seemed somewhat isolated, representative mostly of continuing attempts to break the siege of Gaza.  This year, it is part of a tremendous mix of grassroots activities aimed at challenging egregious governmental practices, in the eastern Mediterranean, and globally.

III. What I hope to do this year is get a diary going at MyFDL when the flotilla appears to be getting close to where the Israeli military forces will feel they have to respond.  Siun here at fdl will be ready, as last year, to take the ongoing story to the front page. Max Blumenthal may help us directly.  I’m hoping that Mondoweiss will be able to reflect what is happening more rapidly in 2011 than was the case there in 2010.  They have mods, but no mods on the web are as awesome or as rapidly flexible as those of firedoglake.  I may set up a diary at Daily Kos that directs people to fdl‘s coverage.

[image – captured Israeli commando being led down to the infirmary of the MV Mavi Marmara, for medical treatment, at the same time IDF forces were summarily executing Turkish and American captives on the top decks. Image attributed to Reuters, but taken by Kevin Neash of Victoria, BC]