Monsanto’s Former Head of Research Teams up with Bill and Melinda Gates. 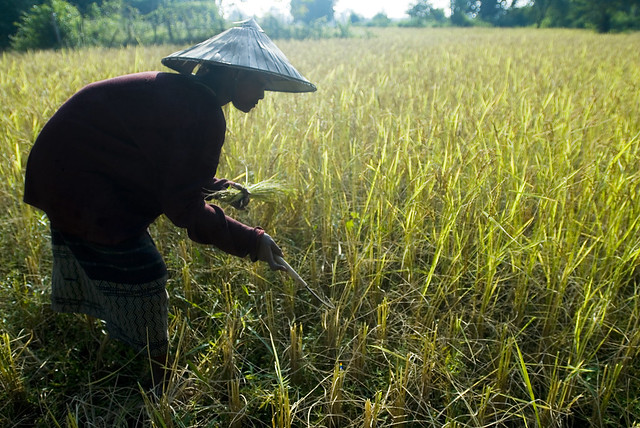 In an article posted by a Dr. Mercola on June 21st, 2011 in Food Consumer.org he tells us:

The Bill and Melinda Gates Foundation has approved $20 million in new monies toward the development of “golden rice” — an untested, highly controversial GE (genetically engineered) crop that threatens biodiversity and risks bringing economic and ecological disaster to Asia’s farms.

“The leader of the Golden Rice project is Gerald Barry, previously director of research at Monsanto.”

Golden rice is a Trojan horse for pushing through GE-friendly biosafety regulations under the guise of humanitarian aid. Once in place, these regulations open the door for the biotech industry to bring in commercial, patented GE crops; USAID and Monsanto accomplished exactly this in Kenya with their sweet potato project.

In the Netline link below, corporate influence, U.S. Government corruption, and Wikileaks cables are discussed. It is worth your time.

As reported by Netline, Monsanto and other biotech companies have collaborated with the Gates Foundation via the Alliance for a Green Revolution in Africa (AGRA) to inject genetically modified crops into Africa. The Gates Foundation has donated hundreds of millions of dollars to AGRA, and in 2006 Robert Horsch was hired for the AGRA project. Horsch was a Monsanto executive for 25 years.

“In a previous Huffington Post article, Eric Holt Gimenez sums it up nicely:”

Under the guise of “sustainability” the [Gates] Foundation has been spearheading a multi-billion dollar effort to transform Africa into a GMO-friendly continent. The public relations flagship for this effort is the Alliance for a Green Revolution in Africa (AGRA), a massive Green Revolution project.

WHAT Am I Missing Here?

I must admit to some confusion with this story. I don’t understand. Why would the Bill and Melinda Gates Foundation be so hell bent for leather to spread GMO crops all around the planet as fast as is possible. The Gates’ already possess more money than God. And Monsanto’s reputation, even among our transnational corporate masters, isn’t one with which you would think that anyone would wish to associate themselves.

I have been reading all I can get my hands on this month regarding the genetic engineering of our food supply and some newly documented, very frightening consequences that are just coming to light after nearly 15 years of the now clearly premature proliferation of this “new age” science. I have written about those consequences in recent posts shared with all you Firedogs  here, here, and here.

Prior to coming upon these astonishing  new stories this month, I had always read the occasional GMO story and thought somewhere in the back of my head that some “bad outcomes” were possible, more than likely probable, given the lack of accountability and ruthless behaviour that we now allow our present day mega-corporations. But I can’t say that I was ever truly alarmed. I figured that the “farmers” were fighting this fight. Well, no man is an island……and…… I can no longer say that I am not alarmed.

1.)Now we are talking about new pathogens arising, that are likely capable of infecting all of life, both plant and animal. And now proven to severely diminish reproductive capability in our livestock and probably ourselves.

2.)New gene spliced bacteria that mutates the “normal” bacteria in our own digestive tracts and begins producing pesticides.

3.)Even the great rallying cries of GMO proponents (sustainability and greater more efficient production) are proving to be   fallacies.  GMO crops require more and more pesticides, leaving higher residual concentrations of pesticides on the crops at harvest time; while becoming more susceptible to diseases. And the crops become nutrient deficient, which basically defeats the whole idea behind eating food.

4.)There is no way to prevent cross-pollination contamination by insects, so once a particular GMO crop is introduced widely enough, all natural varieties of that crop are eliminated.

5.)And speaking of insects, CCD (Colony Collapse Disorder) afflicting our friends the bees; is believed by more and more scientists to be associated with the spread of genetically engineered crops. I haven’t found any current research with newly definitive conclusions. Though I have read, it is estimated that if bees suffer extinction, we as a species have perhaps four years remaining on this planet.

6.)Biodiversity is a good thing. Intentionally choosing to become reliant on monocultures is setting us up for horrific disasters when unanticipated failures occur due to unforeseen developments that……. will……. happen. It seems to be starting already.

7.)Lastly, the creation of GMO monocultures works about the same way that predatory capitalism works. Nothing good can come from it. Monopolies were once outlawed, and for good reason. The potential for worldwide harm here is simply staggering in its breadth. And “worldwide harm” is a ridiculously innocuous way of describing the starvation of millions. Billions? But it is a great way to corner the market and rake in billions. Trillions? If you are Monsanto.

But with all of the above mitigating against the use of GMO’s, why are the Gates’ bringing their power and influence to bear?

Monsanto’s Former Head of Research Teams up with Bill and Melinda Gates.