I’ll give it to him: Barack Obama has had a hard row to hoe. Many of his supporters – myself included at times – believe that he simply cannot win. It can’t be easy when there is an entire cable network dedicated to squashing any credibility he may have left with disinformation and hysteria.

But yesterday, when the President sashayed across the street to pander to the right-wing Chamber of Commerce, he failed. Just the fact that he is reaching out to them serves to validate them and what they stand for.

What Do They Stand For?

The Chamber of Commerce spent more than $32 million on campaign ads in 2010, 93% of which went toward Republican candidates. Since the Citizens United decision in January 2010, this is a perfectly legal way for corporations to dump money into the hands of the candidates they want to buy, without suffering any repercussions for exercising their “First Amendment rights.” They openly advocate for the outsourcing of jobs. And they do this all while maintaining an air of legitimacy that comes, in part, from their proximity to the White House.

Obama has done nothing but bend over backwards for businesses and large corporations when it comes to pushing policy. The stimulus bill passed early on in his presidency contained about $10 billion in tax cuts and incentives for businesses. If you believe that the renewal of the Bush tax cuts for the rich equals business owners investing more in the economy – which I don’t, but most Republicans do – then there’s another win.

Now, in a gesture eerily reminiscent of the speech he gave to the big bank CEOs after the passing of the financial reform bill, he has decided to bow down to the right again. While giving lip service to the plight of the American worker, his real message is clear: Republicans, I’m here for you; please tell me what I can do to make you happy.

This spectacle just one day after his disastrous interview with primetime bully Bill O’Reilly. What was the worst part? The part where he granted an interview to Bill O’Reilly. Again, this legitimizes the daily smear campaign that goes on at Fox News at Obama’s expense. Until these clowns admit they are a conservative organization the administration should not give them the time of day.

Back in December, the infamous deal he made with Republican Senate leaders extended the Bush-era tax cuts for all tax brackets for two years, offered a two-percent reduction in payroll taxes for one year, and compromised on the estate tax by lowering it from 55 to 35% with a $5 million exemption for two years.

And what did his progressive base get in return? A 13-month extension of unemployment benefits.

In politics, framing is everything. And when Obama wants to, he can be a pretty shrewd politician…sort of. The rhetorisphere was filled with images of Republican hostage-takers, holding their machetes to the throats of millions of jobless Americans. So, in this framework constructed by the administration, Obama had no choice; he simply had to “negotiate with terrorists,” to help the poor, defenseless unemployed, right?

Not exactly. Barack Obama is the president of the United States. He has the bully pulpit. He could have hit the campaign trail, visiting swing states, making his case all over the country. The Republicans had been crying about the fiscal responsibility that they like people to think they have for two years, and now they wanted to blow a $400 billion hole into the deficit solely to benefit the rich. This was not a difficult case to make by any stretch of the imagination.

But he chose not to do this.

When this “deal” was made, a thought emerged from my head that I had perhaps not wanted to entertain until then: Barack Obama is a closet Republican. In this context, suddenly all of his inexplicable decisions made sense. I envisioned him and his buddies, like Mitch McConnell and John Boehner, sitting in a hot tub, smoking cigars, drinking champagne…and laughing at us.

Is He Really That Bad?

Why did the tax cut deal mean so much to me and other progressives? Because in 2008, Obama ran his presidential campaign, in part, on ending the Bush-era tax cuts for the rich. It was part of how he defined himself as a candidate. And since he’s been in office he has abandoned his liberal base to a staggering degree – he has even insulted them, calling them “whiny” and “sanctimonious” and labeling those who rejected his offensive deal as “purists.”

What makes us better than Republicans? We don’t have to meet with the caucus before we can give our opinion. We think for ourselves. We have a conscience. But what we need to do is work on our collective memory. Everything is so fleeting in politics…it’s like high school: one day you’re the most popular kid in class and the next day you’re getting the crap beaten out of you. And there’s so much going on, that we all forget what has happened in the long run. When the 2012 race starts revving up, we need to remember Obama for who he really is.

Look Forward, and Promote the Torturers 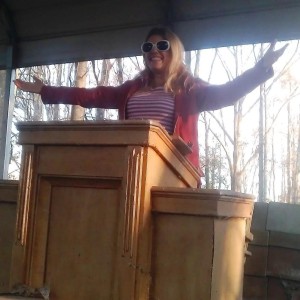