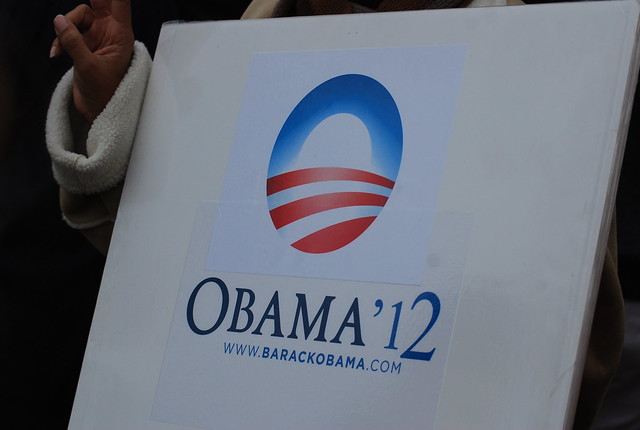 (from Adam Fagan via flickr.com)

Wandering the blogosphere and FDL this morning, I was struck by how little attention was being paid to the fact that a second SOTU is effectively the first big speech for re-election.  Last night’s wasn’t about the State of the Union, these speeches no longer are.  The pundit class gets it in spades.

The President didn’t catalog our woes and pains except in the vaguest imaginable terms.  There was no mention of the true measure of how far we far are from economic recovery:  The millions of unemployed,  the next projected millions of home foreclosures, the lackluster increase in GDP, or what a phony measurement of economic health that actually is.

Instead, we saw pragmatic hope coupled with the newly-discovered need to cut the deficit, and some American Exceptionalism packaged into terms business can love: lower corporate taxes, a nod to tort reform and a race to the top for education AND innovation, public-private partnerships in development, a five-year domestic budget freeze, etc.

But this wasn’t a speech for how to get Americans back to work right now, or solving the mortgage debacle, or prosecuting Wall Street fraud, or enforcing the regulatory reforms that already exist, or restoring confidence in banks or home purchases or borrowing or lending.

It was designed to give everyone but Progressives and the Far Right reasons to re-elect him. Liberals will like his dissing subsidies to Big Oil and speaking of electric cars and high-speed rail.  They’ll like his carefully-chosen words about Social Security:

“To put us on solid ground, we should also find a bipartisan solution to strengthen Social Security for future generations. And we must do it without putting at risk current retirees, the most vulnerable, or people with disabilities; without slashing benefits for future generations; and without subjecting Americans’ guaranteed retirement income to the whims of the stock market.”

Few will be cynical enough to wonder what the vague ‘without slashing benefits for future generations’ might mean.  (I’m a cynic, so I have to wonder…)  It reminds me of  a paraphrased Clintonian moment like , “It depends what you mean by ‘slashed’; or  ‘raising the retirement age isn’t slashing; it just shrinks the pool of recipients for a time.’

Moderate Republican can love plenty of his embrace of Trade Deals; hell, the Chamber of Commerce allegedly liked the speech! ‘Investment’ rather than ‘spending’.  There was plenty more; I won’t try to list them all.  The entire foreign policy section was too cynical for me even want to remember.  But this was the Ringing Gong he wanted us to hear after the ‘We will defeat you!’ portion:

“And America’s moral example must always shine for all who yearn for freedom and justice and dignity.  And because we’ve begun this work, tonight we can say that American leadership has been renewed and America’s standing has been restored.”

But please see it more as a Campaign Speech; and sadly, maybe even a Campaign Speech to a new base, the base that can get all warm and gooey believing that there still is an American Dream, ‘even if it takes hard work’, and that ‘no one here wants to live anywhere else but the United States of America’, and that “…this is a nation where you can make it if you try.”