Who Is Singing These Songs With Us?

These last days here in Florida, I’m roaming around inside big groups of Americans who are singing together. Christmas carols. On Christmas day itself, something about the words in those songs stopped me. Lines like “Joyful all ye nations rise, join the triumph of the skies!” and “The stars in the sky look down where He lay…” “And heaven and nature sing!”

The skies triumphing? Nature singing? The stars looking down? These songs give empathy and warmth and even ego – to the natural world. Also: the animals in the stable, and the GPS-like star over Bethlehem that leads the Three Kings. This lovely animism is all over these Christmas hymns. This is not the first time that modern god-consumers unknowingly adopted something indigenous, far more ancient than their religion. This notion that Spirit is in all things, and that hills and clouds and stars can change the fortunes of all of us – do we still sense this? Can I learn to remember where I’m from? Are the hills and clouds and stars inside my fingers now as I type? Walt Whitman would say so!

I’m in an epicenter of Christianity the last few days, visiting my father in Florida. I can tell you what you already knew: Christians on their big day forget about the Earth entirely. The waste of Christmas is famous. In the United States about 5 million tons in extra waste is dumped into land-fill, and into our air and water. The “Holy Night,” the “triumphant sky,” and such – are getting trashed by the followers of that baby in the manger that the night and the sky praised so unforgettably. And yet, millions are singing these words.

The key to the great shift that must take place to reverse the accelerating emergency of the Earth – is hiding in plane sight. As much as our built environment of concrete and pavement tries to mask out the Earth, birth and death reminds us that we ARE the Earth. As much as the Earth is pushed into the distance by policy-makers and corporations and wars, it is never far away. And if we sing of our greatest hope for a prince of Peace, it makes sense that the Earth and the sun are glowing there in the manger before we have the chance to put a Black Op under the Christ-child’s tree.

These people are singing for Peace? As they do so, dressed up in their Sunday best, their taxes are killing children and other living things everyday. Would it startle them into Peace to notice the words they are singing? The Earth knows that its dominant species will need some kind of major jolt. The Earth is trying to point this out, with tsunamis, earthquakes, fires and droughts. Our words have to burst into flames. Our words need to rise like an angry sea. But the words of the Earth are already in our mouths. “While fields and flood, rocks, hills and plains/Repeat the sounding joy/Repeat the sounding joy!” Earth-a-lujah! 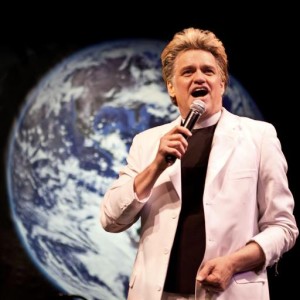 Who Is Singing These Songs With Us?