Today was the pre-Netroots Nation LGBT National Blogger and Citizen Journalist Initiative, hosted by Mike Rogers, and it was an opportunity for around 60 organization leaders and bloggers to get together and discuss not only strategy for working together, but to get the kind of face-to-face interaction that we rarely able to do since we are scattered around the country.

I live-tweeted the day (hashtag #lgbtnn10), and blogger Zach Ford did a good writeup of today’s activities.

The focus of our day was really about bridging gaps in the movement. How can the organizations and the bloggers work together to move forward? Even though as citizen journalists we have an obligation to hold our leaders (both political and activist) accountable, we do ultimately have the same goals of seeing equality where it’s currently lacking. Everyone from HRC to GetEQUAL to Lambda Legal to GLAAD were on hand to talk about not just what they are doing, but how they can work with us to accentuate their efforts and spread their message.

As we discussed issues like immigration, marriage, employment nondiscrimination, and HIV/AIDS, it was inspiring that we didn’t just talk about how to use new media, we made commitments to using it together. We said, “This is a good idea, and we are going to work together to employ it.” It makes perfect sense for HRC and Pam Spaulding to cooperate on highlighting stories of people who have lost their jobs because they are gay. It makes perfect sense for Jeremy Hooper and I to work together on opposition research for anti-gay religious groups. It just takes us being in the room together and putting it out there and making the commitment. That’s the Netroots in action. 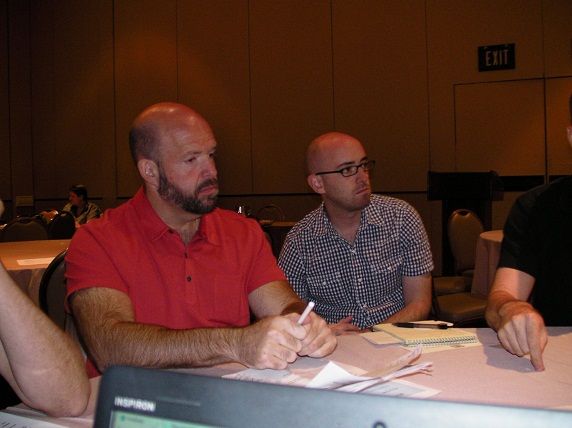 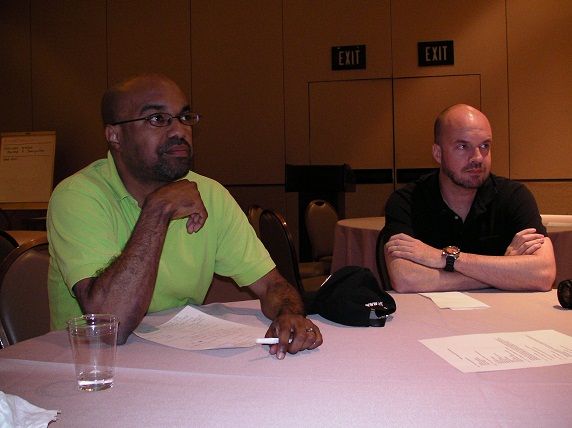 Ron Buckmire (l) of Immigration Equality and Denis Dison of The Victory Fund (r) meet with my blogger table. 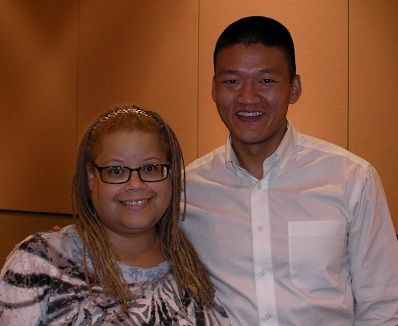 With Dan Choi before the ENDA discussion group began. He spent about 12 hrs in jail on Tuesday’s direct action in Las Vegas; Robin McGehee 17 hrs.

Mike Rogers had these remarks at the close of today’s event: