Last week the lieutenant governor of South Carolina was recorded saying that poor children should not be receiving free or reduced priced school lunches because "poor people breed"!
After I hearing this recording I was so dumbfounded that I could not articulate a response. Here we have the second highest civil authority of a state essentially advocating that poor children should go hungry and by implication their parents as well because if they are fed they will continue to reproduce! Scrooge before his conversion said in substance precisely the same thing and went so far as to note that if they died it would "decrease the surplus population". the difference of course, Scrooge was a FACTIOUS literary character and this insensitive buffoon is NOT but instead the assistant chief executive of the state of South Carolina! I am sure that he has loudly proclaimed his "Christian" credentials as many "conservatives" are loathed to do in political ads and campaign rhetoric. I am also certain that he has waved the flag, carried the Bible, and proudly admitted to membership in the National Rifle Association! You see in "his" America the poor are poor either because they choose to be, the old "anyone can pull themselves up by their bootstraps even when they don’t have boots" manure or they are poor because it is "divinely" willed. In his America the poor only reproduce and are at best a bother and at least a source of very cheap labour. They are also an embarrassment for local Chamber of Commerce chapters as they ruin the look of the yuppie downtown shopping district and worse yet they probably smell and will aggressively panhandle if given the opportunity. In his America the poor are a drain on municipal, state and Federal resources and clog up like a log jam the "superior" health care system. Lastly as distasteful as the poor are after all the Bible says you are always stuck with them like it or not. From what I hear from relatives in that state many people have rushed to agree with the lieutenant governor and no doubt these same people fill the pews of the churches on Sunday morning.
As I have said before I say here again. The American "brand" and I choose that word deliberately of Christianity is a counterfeit christianity that weds the greed of unbridled capitalism with the trappings, and only the trappings, of religion. Its’ unholy union produces a bastard messiah and a false dogma of wealth and nationalism written on a cross of egocentric consumerism. For those like the lieutenant governor who sit in the very comfortable pews and bask in the false light of this evil perversion that dares to call itself "Christian" the Bible you so loudly proclaim, condemns you and the heresy you breed daily!
You cannot hate, you cannot deny your neighbor or the alien or the stranger bread, you cannot exclude those who are different from you, and you cannot worship money and status and power whilst having the bitter gaul of calling yourself a follower of Jesus Christ!
Peace
Father Andrew Gentry 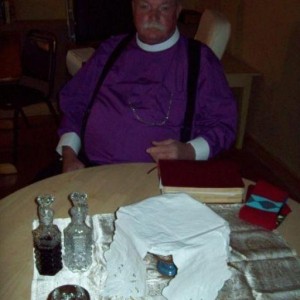