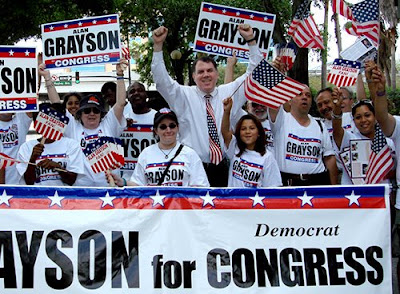 Blue America has helped channel nearly two million dollars into congressional campaigns. And, of course, the results have been mixed. We lost some and we won some. The National Journal measured the effectiveness of the Inside the Beltway political action committees and didn’t include us because, proudly, we’re 100% Outside the Beltway. However we helped People For the American Way put together their own endorsement list and we joint fundraised for the candidates. The primary difference was that they included some a few candidates on their list that they have special relationships with. None of those candidates won. And People For the American Way came in #1 in the National Journal survey. 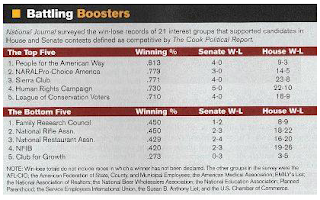 If you read that paragraph carefully, you realize that Blue America outperformed– in terms of picking winning candidates– every single Inside the Beltway PAC. But, like I said, our results were mixed. We lost some important races– like Darcy Burner’s, John Laesch’s, Charlie Brown’s and Dennis Shulman’s– as well as helping 26 men and women win House and Senate seats. A few of the ones we helped have been disappointing and a few even went over to the reactionary Blue Dogs. Only one, though, Chris Carney (Blue Dog-PA), was a disaster. Most, on the other hand, have been excellent members of Congress, from Donna Edwards (D-MD), Gary Peters (D-MI), Jared Polis (D-CO) and Jeff Merkley (D-OR) to Carol Shea-Porter (D-NH), Steve Cohen (D-TN) and Ben Cardin (D-MD).

None of our winners, though, have done better than one of our most unlikely successes: Orlando progressive Alan Grayson. When we first endorsed him, no insiders thought he had even an outside chance to win the primary, let alone beat an entrenched, well-financed Republican incumbent. But almost immediately we realized that Alan was anything but a run of the mill Democrat. Tireless, brilliant, idealistic and down to earth, the more we got to know of Alan through the primary and general campaigns, the more we realized he could be a rare leader in Congress who could make an outsized difference.

I remember him telling me one day after a meeting with central Florida labor unions how he had told them that if he were elected he would start the ball rolling towards passing a law to guarantee paid vacations. That sounded as crazy as… well, as weekends must have sounded when they were first proposed. Or Social Security. Tomorrow Alan is introducing a bill, the first in (American) history, that guarantees paid vacations. (France guarantees a month of paid vacation per year.)

The bill’s provisions, which are expected to meet stiff opposition from Republicans and Blue Dogs poll exceedingly well among average Americans. Nearly 70% of Americans support the idea. This is what Grayson’s legislation would accomplish:

• Covers workers after one year on the job. Part-timers must work 25 or more hours a week and 1250 hours per year to be covered.

Oddly, it wasn’t even Grayson’s dedication to the betterment and security of working families that first attracted us to him. It was a Vanity Fair feature on his astounding work bringing war profiteers to justice. And this week Vanity Fair is back with another powerful piece of the Alan Grayson story: Freshman Democrat Alan Grayson Attacks Obama’s War Policy.

Vanity Fair wanted to follow up on Grayson’s statement to the NY Times last week that he would– as he did– vote against Obama’s request for funding to make war in Afghanistan and Iraq. Only 59 other members of Congress joined him. VF wanted him to elaborate. He was happy to:

The reason why I said what I said is because the fundamental goal of our endeavors in Iraq and Afghanistan is supposed to be to protect us. That’s why we call the Defense Department the Defense Department, because it’s supposed to defend America. And whatever the perceived threat may be, whether it’s al-Qaeda or the Taliban or otherwise, only by the most incredibly convoluted Bushian logic could you possibly get to the point where you conclude that as a result of that threat we should spend $100 billion a year and send over 100,000 of our young men and women abroad, 8,000 miles away, and that that is an effective way to accomplish that goal. It doesn’t make any sense.

Life does not consist of a Risk board game, where you try to occupy every space on the planet. There’s no other country that does this, there’s no other country that seeks to occupy foreign countries 8,000 miles from their own border, and believe that that somehow accomplishes anything useful. It doesn’t. If in fact it’s important to our national security to keep al-Qaeda or the Taliban under control, there are far more effective ways of accomplishing that goal, if that is in fact the goal, than to extend this kind of money and this kind of blood.

This is something that Democrats said when they were in the opposition repeatedly, and that truth hasn’t changed at all just because we elected a president. You can always find some kind of excuse to do what you want to do anyway, but I have to wonder why a new Democratic president wants to do something like this. This is a president who has recognized the immorality of torture, and I’m waiting for him to recognize the immorality of war and foreign occupation.

I think that we have to get out. I think that we should have left both these countries a long time ago. In the case of Iraq, the reasons that we were given at the time the war began were all lies, and we all know it, and as a country we should have been willing to learn from that mistake a long time ago. We have conducted wars without paying for them for the past seven years, and the result of that is that we have come close to destroying our national economy.

At this point I’m really not terribly concerned about the well-being of the Shiites, the Sunnis, or the Kurds. What I care about is our surviving these difficult economic times, and when I’m asked to vote for $100 billion to extend occupations that fundamentally served no purpose that could not be accomplished any other way—in lieu of spending for the things that human beings need, at a time when we have schools closing in Orlando, at a time when we are laying off firefighters and police officers– I have to say, “No, there’s a better use for that money.”

But it has been Grayson’s harsh interrogation methods (at the Financial Services Committee) directed at crooked banksters, clueless bureaucrats, and other stalwarts of the notion that the public purse is there for the plucking, that has most enraged the Republicans. Grayson, ever the champion of working families, treads where few other members of Congress dares go– right on the toes of Congress’ biggest campaign contributors. That’s earned him a huge target on his back and the GOP vows to defeat him in 2010. Given the demographic shifts in this district and the enthusiasm for their tough new Representative from voters in central Florida, it will be an uphill battle. If you’d like to help Alan Grayson keep his seat, our Blue America ActBlue kitty for him is still open.

Howie Klein spent much of his life wandering around the world living in places like Afghanistan, Nepal, Holland and Morocco. He moved backed to America when Richard Nixon resigned and promptly helped start the first punk rock radio show in the country and then a DIY punk rock record label. His adventures in the music business ended a couple of years ago when he retired as president of Reprise Records. He began blogging almost immediately, starting Down With Tyranny. Jane taught him html while he held one of her dogs at a party. He is a raw foodist, lives in L.A., swims and hikes every day, thinks Howard Dean could be a president as great as FDR and will never be completely happy until Bush and Cheney are behind bars.