As predicted, the professional anti-gay forces plan to descend on NC 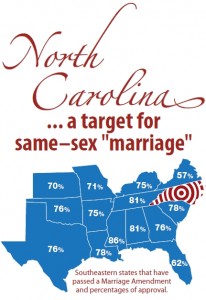 Those of us here in the newly Blue state of North Carolina knew all too well that when marriage amendments passed passed in California, Arizona and Florida that the fundies would start poking around to see where they could find fertile ground to stoke the fires of bigotry.

As the last state in the South without a marriage amendment, North Carolina is a prime target for rally the battle cry of anti-gay religious forces and scare a General Assembly full of legislators who don’t want to discuss the issue. For five years the Dems have killed the bill in committee. If it were to make it to a floor vote it would pass because even many of the Dems haven’t the spine to publicly oppose the amendment — they were happy to see it die without debate. If the civil right of Tar Heel same-sex couples to marry were on the ballot it would likely pass.

Matt Comer at Q-Notes reports on the from the NC4Marriage movement, which has planned a rally for March 3 in Raleigh.

Two years after their first rally, the Winston-Salem-based Return America will return to Raleigh on March 3, 2009, for a thousands-strong rally at the N.C. Legislative Building:

A coalition of anti-LGBT, fundamentalist churches has announced it will hold a rally at the North Carolina Legislative building in support of “traditional marriage.”

On March 3, churches across the state will bring busloads of rally participants to Halifax Mall, the green park behind the building where state legislators meet daily for legislative work. The rally, expected to draw thousands, is being organized by the Winston-Salem-based Return America. Berean Baptist Church pastor Ron Baity is the organizer.

The Christian Action League and NC4Marriage are supporting the rally. “Activist judges in Massachusetts, Connecticut, and California have overturned their state marriage laws because they only allowed marriage between a man and a woman. These judges have declared traditional marriage unconstitutional and ushered in same-sex ‘marriage,’ overriding the people’s wishes,” Tami Fitzgerald, executive director of NC4Marriage, said on the website of the Christian Action League. “This type of judicial activism could be coming to a court in North Carolina very soon.”

Equality NC, in response will hold its 2009 Equality North Carolina Day of Action on March 24, a day for lobbying our legislators to counter with factual information face-to-face.

NC4Marriage has this on its web site.

Marriage in North Carolina is under attack and needs protection!

We must protect marriage by convincing our legislators to pass a Marriage Protection Amendment bill that will allow the people of North Carolina to vote on a constitutional amendment defining marriage as the union of only a man and a woman. But we need your help!

NC4Marriage plans to bus in thousands for that event on March 3. These folks are organized, well-funded and now that the national anti-gay organizations have time on their hands (since the Batphone to the White House has been disconnected), they will no doubt be able to outspend and outgun pro-LGBT forces here. It will be interesting to see what happens, since I know many people here organized and donated to help fight amendments in other states. Will it be left to Tar Heels to fight this one alone since we’re not one of the Big Blue states? My hope is that I don’t have to answer this question if we can get our Dems in the GA to kill this bill again.

As predicted, the professional anti-gay forces plan to descend on NC