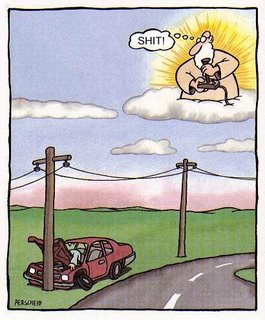 Where Is Atheism When Bad Things Happen?

Notice something interesting about the aftermath of the Virginia Tech shootings? Atheists are nowhere to be found. Every time there is a public gathering there is talk of God and divine mercy and spiritual healing. Even secular people like the poet Nikki Giovanni use language that is heavily drenched with religious symbolism and meaning.

The atheist writer Richard Dawkins has observed that according to the findings of modern science, the universe has all the properties of a system that is utterly devoid of meaning. The main characteristic of the universe is pitiless indifference. Dawkins further argues that we human beings are simply agglomerations of molecules, assembled into functional units over millennia of natural selection, and as for the soul–well, that’s an illusion!

To no one’s surprise, Dawkins has not been invited to speak to the grieving Virginia Tech community. What this tells me is that if it’s difficult to know where God is when bad things happen, it is even more difficult for atheism to deal with the problem of evil. The reason is that in a purely materialist universe, immaterial things like good and evil and souls simply do not exist. For scientific atheists like Dawkins, Cho’s shooting of all those people can be understood in this way–molecules acting upon molecules.

If this is the best God that religion has to offer, I think we’re gonna need a better deity…