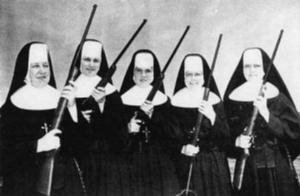 Malkin encourages everyone to sack up:

Instead of teaching students to defend their beliefs, American educators shield them from vigorous intellectual debate. Instead of encouraging autonomy, our higher institutions of learning stoke passivity and conflict-avoidance.

Of course this comes from she who moved her family and hid during The Battle of UC Santa Cruz and, when given the opportunity to bravely defend her belief that we might want to round up people of the dusky hue every time we hear a car backfire, in a vigorous intellectual debate with Max Blumenthal, she bravely ran away. Malkin’s point, and she and her husband Jesse seem to think that she has one, is that maybe college students packing heat isn’t such a bad idea. But, then again, you’ve always got a few hotheads on campus and who knows what is going to push them over the edge:

Commencement exercises had just finished, and Mr. Malkin was talking with College Treasurer Charles Tharp, somewhere close to the memorial arch. I approached them and circled around quickly, trying to find the best angle. I knew Mr. Malkin was a Rhodes scholar, founder of this publication, and that he had been Mr. Tharpâ€™s intern. In other words, here was someone whom I thought should definitely be in the yearbook – he was important. As I circled around, I raised my cameraâ€¦I snapped on picture.

Suddenly, Mr. Malkin turned to me, yelling â€œDonâ€™t take my pictureâ€¦â€ I wondered why he was yelling, but lowered my camera. There were other, equally important people whose pictures I had yet to take. Suddenly, he lunged out at me, shouting, â€œDonâ€™t fuck with me, or Iâ€™m going to kill you!â€ He grabbed my arm and tried to grab my camera, continuing to spew insults and death threats. The civilized scholar had suddenly transformed into an uncontrollable savage. Fortunately, a friend managed to pull me away from his grasp. Malkin must have regained his senses as his vicious fit ended and he ended his attack. This friend and several other people were all witnesses to this act of violence.

History would have recorded this as the shootout at the Oberlin Corral….