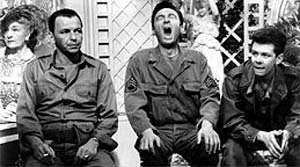 After a review of postings on the Virginia Tech shootings we’re going to have to give the Bull Goose Loony Award to AJ Strata who showed extraordinary creativity and verve in coming up with the theory that this might have been a dry run for a terrorist attack. No. Really.

It seems the Massacre at VA Tech (where I went to school briefly) was premeditated. The reasons are clear in the latest reports. First off the man took a gun to confront his girlfriend, who was more than likely trying to get out of sufficating (sic) relationship (I have seen this pattern before, but with less violent results). When he did not get what he wanted and an RA came to deal with the commotion the man pulled his gun and killed the girlfriend and RA. This means the man planned the confrontation and brought the gun with him.

The second act was also premeditated since the man came with guns and clips and the ability to chain the doors (when I was there there were no chains even wrapped on the doors to close them). Finally there is reporting that the bomb threats in the prior weeks were tests of the response time of the authorities. Combined with the news the man was a 24 year old from China shows a combination of military training (not OUR military lefties) and planning.

What really worries me is if this was a test for other attacks. If the man was testing College responses then the key would be to make this look like anything BUT a terrorist attack. I am not making the claim here this was terrorist related, but the man did not seem to be looking for his girlfriendâ€™s lover, he seemed to be out trying to kill anyone he ran across. A perfect diversion for a test run would be a loverâ€™s quarrel. And ending it in a â€™suicideâ€™ negates the ability to get to the bottom of his motives. Of course violent jealousy is not uncommon, and more so in male dominated societies like those in Asia and the ME. In those places killing women is like throwing away property. But something is not right here. For someone who was in the emotional throws of jealousy, the attack shows signs of careful planning and cold execution. The two characteristics do not mix. Careful planning and cool execution implies a lot of self control and discipline, things which are in complete opposition to an out of control act of rage.