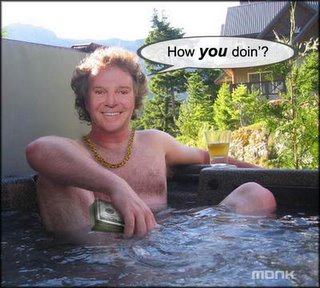 Anyone catch the Bugman on Hardball pimping his new book?  He's gone round the twist:

MATTHEWS:  You say [Dick Army] was "drunk with ambition."

DELAY: Actually that's not what I said.  What I said was "blinded by ambition.  "Drunk with ambition" is a quote of a cliche.

MATTHEWS:  Why would I underline it in the book?

DeLay babbles for a while as Matthews looks up the quote:

DELAY:  Uh, read the sentence before that.

MATTHEWS:  That's what I just did.

DELAY:  It says "blinded by ambition."

MATTHEWS:  No, I'll read the sentence again:  "He resented me…"  It's right here in your book.  You gotta read it.  (Matthews hands him the book).  I'm sorry Tom but it's there.  It says "drunk with ambition."

DELAY:  That is the cliche…but right up here, I don't have my glasses on, right up here it says "blinded by ambition."

After six years of constantly indulging a bizarre addition to lying, he really doesn't have the capacity to tell the truth any more.  Is BushCo. so desperate for people to go out and defend them in public they have to resort to Tom DeLay?  Who let him out of his cage?