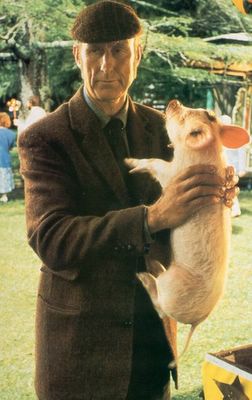 “Put on your Nikes, Man-O-Pork. Muslims is coming”

Everything you ever needed to know about Mary Katherine Mallrat:

Take a good, old-fashioned property dispute, add Muslim sensitivity and a hearty helping of country-fried dispute settlement, and you’ll get this:

While Muslim faithful are worshiping Allah, sounds of liquored up Texans chasing greased pigs may soon be heard outside the mosque.

“Comin’ soon weekly Friday night pig racin'” reads the sign in the Houston suburb of Katy. It goes on to promote a greased pig-catching contest, the opportunity to purchase a slow pig to save its life and–of all things–a pork cook-off. Bring your own bottle, the sign also says and boasts the availability of “clean port-o-pots.”

It sounds like a rowdy Friday night outing, Texas style.

But the planned pig races are wallowing in controversy. A Muslim group having just purchased adjacent property to build a mosque is not amused by the new sign and upcoming swine activities as neighbors–including parishioners at a nearby church my mother pastors–are left wondering what’s going to happen to the neighborhood.

Not far from the large pig racing sign, the other group has a small placard that says “KIA Community Center coming soon,” I’m told, with the acronym standing for Katy Islamic Association.

First off, this sounds like a great Friday night, period. Second,….

First off, maybe it’s because I’m one of those west coast latte-swilling elitists, but an evening spent with a bunch of barbecue-eating drunken yokels watching pigs run around a track doesn’t fit any definition of “great Friday night” that I am aware of, “clean port-o-pots” or not. Although given the choice, it does sound like it would beat the hell out of watching a bunch of buckle-grabbing line-dancing drunken yahoos at a country bar, but, again…that’s just me. I have to admit I never realized that the tired, poor, huddled masses who flocked to the shores of this great country of ours, came with a yearning for a good old-fashioned pig race:

But here’s the deal. This is America. We have fights with our neighbors and we have the right to pig-race on our property, barring any farm-animal-related ordinances enacted by the municipality in question. Sometimes our neighbors do things, when pressed, that are meant specifically to tick us off. These disputes can get ugly, and a weekly pig race really ain’t all that bad a thing to have next door in the grand scheme of things.

None of us are entitled, whatever religion, to unfailingly nice, respectful neighbors who will refrain from any activity that offends us just because we happen to share a fence. Because that would prevent a whole lot of people from doing a lot of the things they like– like pig-racin’! And, that’s just not the American way.

I would imagine people like Mr. Baker are so sick of watching moderate Muslims stay seated when asked to stand up against radical Islam, and so sick of watching their fellow Americans lay down when confronted with the sensitivities of sharia-observing Muslims, that they figure a good old-fashioned pig race is in order, just to show they’re not gonna get pushed around.

And, for those who freak out about Baker’s insensitivity– Dudes, it’s a pig race. If only everyone waged such friendly, squealing, moonshine-soaked jihad, the world would be a much better place.

Because you have two choices in life. You can either fight over petty sectarian differences related to your deeply held religious convictions which are inflexible about how you conduct your life in order to stay pure and true and holy so that you might gain the approval of an all-seeing all-knowing and yet vengeful God …. or you can race pigs.

How she was left off of the ISG is a mystery to me….

More het parenting beyond the pale