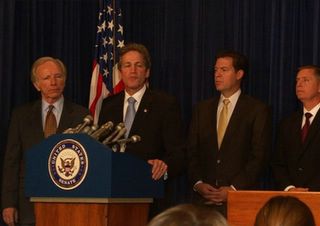 I think we all owe Joe Lieberman a big apology:

On NBCâ€™s â€œMeet the Press,â€ meanwhile, a supporter of Mr. Lieberman, Lanny Davis, sought to explain a statement the senator made last December that Mr. Lamontâ€™s supporters have used against him. In those remarks, Mr. Lieberman said it was â€œtime for Democrats who distrust President Bush to acknowledge that he will be the commander in chief for three more critical years and that, in matters of war, we undermine presidential credibility at our nationâ€™s peril.â€

Noting that Mr. Lieberman had gone on to criticize the Bush administrationâ€™s handling of the war on many occasions, Mr. Davis said on NBC that his friend had not been referring only to Democrats.

â€œThat comment was made about exploiting the war politically,â€ he said. â€œHe was referring as well to Republicans, trying to use the war on terrorism for electing purposes.â€

Mr. Davis added, â€œI think if he had to do it all over again, he wouldnâ€™t have used those words.â€

But, you see, in Connecticut they say “Democrat” when what they really mean is “Republican“. Here, try this:

Joe Lieberman is a Democrat from Connecticut.

Another linguistic quirk in Connecticut is using “sandals” instead of “flip-flops“. For example:

Joe Lieberman sandals on the war in Iraq.