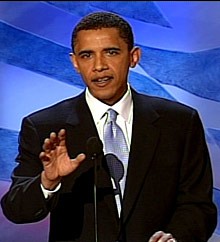 If I can master the lip-biting thing, I’m all set!

First of all, there’s a very thriving religious left, thank you very much.  It’s absolutely false that Democrats and progressives disrespect or somehow fail to include people of faith.  All the establishment media fled YearlyKos before the very moving interfaith service on Sunday morning, because that was not interesting to them, and they had getaway flights to catch.  One of our leading Roots Project activists is a pastor in Massachussetts (home of the abolitionist movement), who delivered a knockout sermon that enlivened her congregation last weekend.  I hope she writes it up somewhere so I can link it.  (UPDATE:  Here it is)

Frankly, I’m fed up with paeans to St. Bill Clinton.  He was extraordinarily talented, and the Democratic party grew far weaker under his leadership.  Yes, we defended him when he was wrongly attacked, but now it’s time to get past Bill worship.  Idiots like Obama still think the path to power is to spin Karl Rove’s lies into oratorical gold to gin up support from people who would rather see him in shackles than see him in national office.

Some people have criticized national blogs for defending themselves against lies and smears from Bobo or from the Joe Lieberman Weekly.  Have you ever noticed that the racist, eliminationist base of the right wing never suffers criticism for (dishonestly) defending itself?  Have you noticed that right wing politicians defend them?  Have you noticed that if the emerging netroots/grassroots movement does not defend itself, many DC Democratics seem more than happy to hang it out to dry, with a very few exceptions, including some comments by Pelosi or Reid?  Have you further noticed who actually wins the national elections?

Bill Clinton used his charisma and political skills to hang on to power while very often selling out the progressive base (NAFTA, anyone?).  For short term advantage, he weakened the progressive movement.  Perhaps it was a compromise he had to make, but that was then; this is now.  When Obama and others imitate him today, they continue to betray us all.

When DC Democrats start standing shoulder to shoulder with their electoral base, they may have a chance of gaining power (as described in this spot on analysis by Chris Bowers).  Until then, they will continue to underperform and weaken the country.