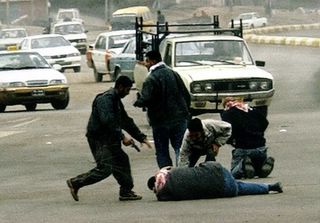 Death by innuendo and smear

Over six weeks ago Michelle Malkin made some more shit up and some in the media took note and ran with it:

One member of the Pulitzer-winning AP team was AP stringer Bilal Hussein. Hussein’s photos have raised serious, persistent questions about his relationship with terrorists in Iraq and whether his photos were/are staged in collusion with the enemy. I’ve learned of an intriguing news development that strengthens those lingering suspicions.

This afternoon, in response to a tip from an anonymous military source in Iraq, I contacted both the AP reporter embedded with the Marines in Ramadi, Todd Pitman, as well as AP’s media relations office headquartered in New York concerning Hussein’s whereabouts. No word from Pitman. But at 6:20pm EDT, I received the following e-mail response from AP:

We are looking into reports that Mr. Hussein was detained by the U.S. military in Iraq but have no further details at this time.

According to my tipster, Hussein was captured earlier today by American forces in a building in Ramadi, Iraq, with a cache of weapons.

I am still awaiting a response from the DOD’s Combined Press Information Center and a Public Affairs Officer in Ramadi.

CBS News, despite being aware of Malkin’s propensity for lying, links to her and throws a little mud on Hussein themselves:

The AP’s photos won a Pulitzer, and Bilal Hussein was a member of the winning team. Writes Malkin: “Hussein’s photos have raised serious, persistent questions about his relationship with terrorists in Iraq and whether his photos were/are staged in collusion with the enemy.” Some of Hussein’s disturbing photographs can be found here, including a shot of insurgents standing over the body of Italian national Salvatore Santoro, guns drawn. Malkin has others, including close up shots of combat. “It’s clear the photographer wasn’t fearful at all for his own life,” she writes.

At this point, it’s impossible to know Bilal Hussein’s relationship to the people he was photographing. Maybe they wanted images they considered to be propaganda to be disseminated, so they gave access to the photographer, even though they had nothing in common ideologically. Maybe they considered him their ideological brother, and he pledged his allegiance to their cause. Maybe the truth lies somewhere in between.

And since then…nada. No correction. No update. Just move on and look for another outrage or fake controversy.

But this is how the 101st Fighting Keyboarders works. Throw a little artifical red meat to the drooling basement boys and watch them go to work turning it into reality.

Hussein was one of several photogs who have a peculiar habit of being in the vicinity before terrorists launched attacks, causing many bloggers to wonder whether he and others were, in fact, colluding with terrorists.

That allegation may be more than just that, however. According to a Malkin source, Hussein was arrested in Iraq with a cache of weapons in conjunction with the anti-American insurgency. In an email to Malkin, the AP confirmed that it had heard reports of the photographer’s detention.(my emphasis)

Take a look at Michelle Malkin’s major scoop this morning about “AP Stringer” Bilal Hussein, who is apparently now in US custody after being found with a cache of weapons in Ramadi.

Next thing you know, he’ll be leading a revolt at Guantanamo…