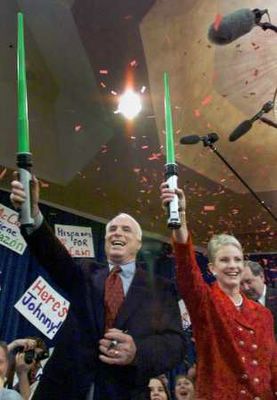 CALLER: Thanks, I had a question for the senator. For a reformer, I’m kind of curious why he would hire a guy like Terry Nelson as a senior advisor. Here’s a guy who was actually in the indictment of DeLay on his money laundering charges. When he was at the RNC, he agreed to take the corporate contributions from DeLay’s PAC and then recycle them back into the Republican congressional races.

And he was also, this guy Nelson was also the supervisor of James Tobin, who was the guy convicted last year for helping jam the Democratic get-out-the-vote lines in New England a couple years ago.

So I’m curious why would you hire someone with such a shady background?

MCCAIN: None of those charges are true.

CALLER: You don’t believe what was actually written in the indictment from Texas?

MCCAIN: I will check it out. But I’ve never heard of such a thing. I know that he was a grassroots organizer for President Bush year 2000 and 2004, and had a very important job in the Bush campaign as late as 2004, but the other charges I will go and look and see if any of them are true, but I’ve never heard of them before.

You see the charges aren’t true…. even though he hasn’t heard of them before.

It was a faith-based hiring, you understand.

Late Nite FDL: Russ Feingold and the Courage to Do the Right Thing