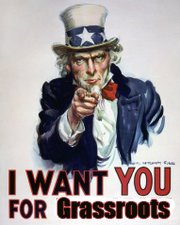 Last night I wrote about social movements and how they develop. That’s all well and good, but social movements don’t develop on their own. The part left out of last night’s discussion was how you can make our progressive movement successful over the long haul.

Social movements unfold through the power of social networks. My training is in psychology. I know all human change happens in the context of relationships. As a student of social change and personal influence, I know the most powerful, influential people are those who have diverse social networks.

What does that mean?

Let me put it to you this way: You regulary interact with a pretty stable number of the same people every week. That’s your core social network. Some people have networks of people who mostly don’t even know each other. Some people occupy worlds of closed networks, where most of the people in their core group all also know each other.

It turns out the people who have the most influence – the most ability to "infect" others with new ways of thinking – are those with diverse networks. And furthermore, the more "loose" contacts you have with people, the more influential you can be as well. I can see that in my life: I can more easily persuade people who know me as an acquaintance than I can my partner, who certainly has his own way of thinking, thank you very much!

The big job we in the netroots have from here on out is to move beyond our closed networks in real life to meet new people. We need to get involved in something that is different, where we can talk to, work with and get to know others we do not know today. The beliefs and biases of most voters form long before election season starts.

What are your interests? Join a baking club. Better yet, get involved in local politics or political parties. That’s what the fundamentalists did. They literally stopped preaching to the choir and got involved in local councils and school boards. That’s how they built their movement, bit by bit, until they became the voting engine of the Republican Crime Syndicate and got the two Supreme Court judges they wanted.

We are often accused of speaking to each other in an echo chamber, and sometimes it’s true. But more and more, netroots activists are pushing to have an impact in the real world. The joint effort arising partly from this site to coordinate local letters to the editor targeting specific senators is a case in point. Those efforts, and others like them, are just the baby steps, just the beginnings of the work we have ahead of us. They are great, but we need more.

Writing letters, sending faxes, calling representatives, contributing money. . . these are all good and necessary things. But we become exponentially more powerful when we can build relationships with those who eventually might jump in with us when we ask them to. We can still congregate online to get fresh information and up-to-date news. But that’s not enough: we need to make new friends offline.

I get frustrated when I hear people make comments about how hopeless the Dems are or how hopeless political trends are, in their view. I take a back seat to no one in pressuring the Dems, as I think my writings demonstrate. But matters are not hopeless if we (you!) act.

I don’t expect newly announced Dem senatorial candidate Webb will be very strong on gay issues, and here in Virginia, my family lives under a particularly nasty apartheid-like system of family law. Gay issues are very personal and important to me, believe me. But those issues will fare better with a Majority Leader Reid and Dems chairing all the senate committees than they will with George Allen and the GOP Crime Syndicate in charge. What’s more, a damaged Georga Allen from a tough campaign is a weakened presidential candidate.

As tempting as it will be to sit the Virginia senate race out, I’m going to pitch in. If he’s elected, I’ll hold Webb’s feet to the fire later. Gay issues can’t even come to a vote in a Republican held senate. And with Webb, we can probably do better on health care, Iraq and a host of other issues that may not affect me as directly, but which affect us all a lot. Being part of a progressive movement means banding together with your allies to be successful, rather than be picked off and steamrolled separately due to the purity of our devotion to our most personal causes.

I sympathise with those who have little stomach for these kinds of compromises. These compromises are peronal, and for many, they are painful. But I also think it’s fair to say this: if you’re not willing to take action, then don’t complain. If you don’t act, don’t waste anyone else’s time with your negativity.

The rest of us have work to do.

We hope you’ll join us.