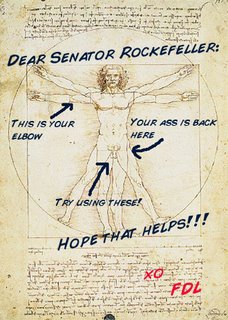 The Senate is a funny place.

And I don’t mean "funny" as in boogers flying, laugh-your-ass-off funny.

Collegiality and all that. People who hate each other – and I mean HATE each other – refer each other as "My good friend. . ." or as "The Gentlelady from (fill in the state)." On the inside, they’re all roller derby eye scratchers, but on the outside, they satisfy Church Lady Brady’s Rules for Pleasant Cocktail Chatter®.

Now, I understand and appreciate Senate tradition, and the importance of respectful dialogue in the halls where political opponents come together to govern a diverse nation.

Excuse me while I douche my mouth.

Enough already with being polite when it means the president asserts the right to ignore the fucking law and the Constitution.

No matter how strong of an immunity one thinks one has constructed against being shocked and disgusted by the acts of national Democrats, it always turns out that it’s never actually strong enough. On Tuesday, after the Intelligence Committee vote not to investigate the President’s illegal eavesdropping on Americans, Sen. Rockefeller angrily said that the Committee was "under the control" of the White House.

What a difference a day makes. Here is the description from The New York Times of what Sen. Rockefeller did yesterday:

But on Wednesday, the Democratic vice chairman of the committee, Senator John D. Rockefeller IV of West Virginia, issued a conciliatory statement, saying that while he favored a full investigation, a committee decision on Tuesday to appoint a seven-member subcommittee to oversee the N.S.A. eavesdropping was "a step in the right direction."

This is not the only example of senatorial sqeamishness we’ve seen. Even former boxer Harry Reid has succumbed, after he wrote this (emphasis added):

I have been in public service for over 40 years and never been as disillusioned as I am today. In 1977, I was appointed chairman of the Nevada Gaming Commission. It was a difficult time for the gaming industry and Las Vegas, which were being overrun by organized crime.

During the next few years, there would be threats on my life, FBI stings and even a car bomb placed in my family’s station wagon. What is happening today in Washington is every bit as corrupt as when Las Vegas was run by the mob, but the consequences for our country are worse.

These Republicans have created the most corrupt government in our history. Their "K Street Project" is a shakedown machine that would make the mafia blush. We cleaned up Las Vegas, and we will clean up Washington DC.

Enough with the Queensberry Rules, people. If you stand together, speak the truth and risk insult (gasp!) to your fucking criminal brethren, the voters will respect you.

And then we can fucking win.

Update: I’m not saying Senators should swear at each other. I’m swearing like a sailor here for rhetorical, dramatic effect. I just want them to speak the truth plainly, bluntly, even when it stings and "poisons" the air in the Senate.

This is one of those periods in history when being blunt will work for you politically. But you have to agree to do this together. When you leave one of your own stuck out there ahead of the crowd, you let the other side brand him or her as an angry lunatic.

Howard Dean’s candor does not hurt you. But when you leave him out there to draw fire without backing him up and defending him, you hurt the party. When the establishment Dem consultants tell you not to look weak, well, in spite of their timid counsel, this is how you do it.