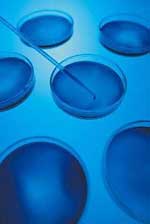 I brought up one of my favorite forced birth conundrums the other day, guaranteed to make wingnut "life begins at conception" heads explode. If a fire breaks out in a fertility clinic and you can only save a petri dish with five blastulae or a two-year old child, which do you save?

We just love Mike Stark, who takes this stuff to the streets. He called Andrew Wilkow’s radio talk show and put the question to him, and Wilkow’s head did, in fact, explode. He was reduced to a sputtering rage, screaming that he would not, in fact, save the two year-old child. Mike hung right in there with him and the results are predictably hilarious. You can just feel Wilkow’s listeners flipping the channel and saying "fuck that noise, that guy’s insane." It’s a brilliant little sound clip.

Over at our new blog (which we will be populating any day now, we just have some graphics issues that we’re addressing) I put up a test of my old "Is Heaven Filled With Blastulae" post, where I mention that that between 60 and 80 percent of all naturally conceived embryos are simply flushed out in a woman’s normal menstrual cycle in the first 7 days after fertilization. One anxious commenter does a Jesus’ General and takes internal wingnut logic to its natural conclusion:

Is Heaven Filled With Blastulae?

My God, you don’t understand fundamentalists at all, do you, Ms. Hamsher? Any fundy will tell you that Heaven is most definitely NOT filled with blastulae. The fires of Hell, on the other hand, are smoking with the little fellers, along with all the other unchristened souls whose bodies never uttered the magic phrase, "Jesus is God".

I apologize for my error, Bullgoose is absolutely right and as a minister’s daughter I should’ve remembered this fine point of fundamentalist theology. The fundies have always conveniently kept swarthy people out of heaven by insisting that if you have not accepted the Lord Jesus Christ as your personal savior that you will not be able to enter the gates of heaven. When others (such as my 12 year-old self) would argue that this is unfair to those in non-western countries who might never have been exposed to the gospel, those concerns were dismissed as "God’s will," because God in his infinite wisdom would’ve managed to get the word to them if he wanted them in heaven.

So. Unless embryos are a lot more chatty than we have been given to believe, Bullgoose is right, in vitro fertilization produces embryos that will only suffer the eternal hellfires of damnation.

I thank you for the opportunity to amend my faulty headline.

Update: We crashed Mike’s server so the clip is now hosted at C&L.

South Dakota: All Your Wombs Are Belong To Us