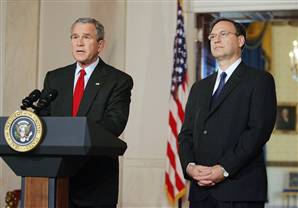 Shorter Alito: I personally find abortion immoral, so I’m going to help the Administration figure out a way to trick the Justices into finding new limits for it. One brief at a time. Heh heh.

Next up, public justification: Judge Alito was just an attorney representing a client. That his personal views coincided with his job had absolutely nothing to do with it. Erm…I mean…

UPDATE: Well, lookie here: Alito offered the same tactical, step-by-step planning advice to chip away at the Fourth Amendment protections and to strengthen the Executive’s authority to wiretap. I think we’ve moved from a single issue assault to some outright, conservative ideology strategery. Sure hope someone is taking notes for the Dems on the Judiciary Committee in the Senate. (Big hat tip to Mark and scarecrow for the heads up on this.)

UPDATE #2: AP (via Forbes) has updated their story on the wiretapping issue to include more background. (Hat tip to John Casper for the heads up.)