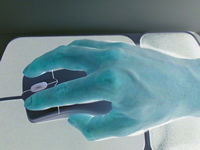 Roger Simon reports on the kind of thing that the MSM puts in a box and drops to the bottom of the sea in order to keep us ignorant and complacent:

Several polling centers distributed sweets and soft drinks to the voters while men and women cheered and sang celebratory songs.

Then he complains because Josh Marshall can match hard hitting PJM/M-O-U-S-E reporting like that:

That doesn’t happen in Los Angeles. Of course, someone like this doesn’t want to celebrate for obvious (and sad) reasons. I guess the election doesn’t merit comment.

US News’ Julian Barnes has been blogging from on the ground in Iraq recently. And today he has a report on voting in Mosul.