Never mind what the President said.
Everyone knows he’s an idiot. 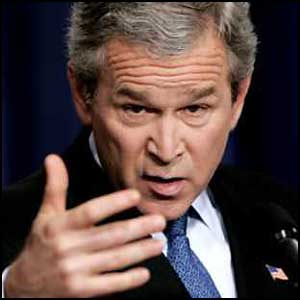 In an effort to save George Bush from…George Bush, the Mudville Gazette clarifies for George Bush what he meant to say when he said what he said but that’s not what he meant and goddamit, Presidentin’ is hard work with all of your fancy-pants multiple choice-like questions:

Q Since the inception of the Iraqi war, I’d like to know the approximate total of Iraqis who have been killed. And by Iraqis I include civilians, military, police, insurgents, translators.

THE PRESIDENT: How many Iraqi citizens have died in this war? I would say 30,000, more or less, have died as a result of the initial incursion and the ongoing violence against Iraqis. We’ve lost about 2,140 of our own troops in Iraq.

Hmmm. Color us literal but we did notice that the Commander in Chief did preface his answer with “How many Iraqi citizens have died in this war?” followed by the number known as “30,000”

Well shit-howdy. Finally, when we are willing to take him at his word, we find out that his loyal subjects insist that he be issued a mulligan because he had to deal with a number other than 9/11.