Someone get the Lincoln Group for a rewrite 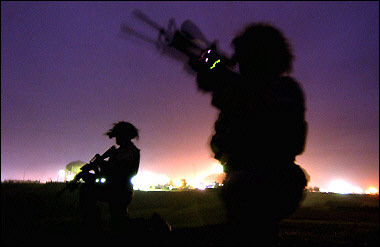 It’s Pat Tillman all over again:

Why did the U.S. military mislead the media and the families of ten Marines killed near the Iraqi city of Falluja while “on patrol” last week about how they were killed? The military announced on Tuesday that it actually happened at a “promotion” ceremony and they were not on foot patrol as initially reported.

Families of the victims immediately raised questions about the incident and it was unclear whether the site had been properly swept for explosive devices.

The Marines were in a disused flour mill on the outskirts of the city to celebrate the promotion of three soldiers, a military statement said on Tuesday.

As the ceremony ended, the Marines dispersed and one of them is thought to have stepped on a buried pressure plate linked to explosives that caused the devastating blast.

But CNN, for example, reported four days ago, based on military reports, that the dead Marines “were conducting a nighttime foot patrol when a roadside bomb fashioned with large artillery shells detonated.”

Because in the fog of war “nightime foot patrol” sounds remarkably like “party”.

Did they think that no one would notice?