A double dose of the Freepi

Blenders, Blenders, I have deprived you of quotes from the land of the knuckledragging mouth-breathers in Freeperland for way too long. Here are two items found from my journey over there.

First I wanted to see the reaction to the news that civil partnerships are now the law in the U.K., and people can now register. The first ceremonies can take place in Northern Ireland on 19 December, followed by Scotland the next day and England and Wales on 21 December. 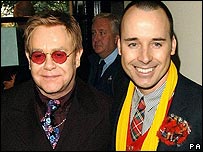 Elton John and his partner David Furnish plan to be one of the first UK couples to marry. They registered their civil partnership today.

So what did emerged from the swamp?

“The sun has finally set on the British Empire.”

“From the mouth of Archie Bunker, “England is a fag country.” I guess he never knew. I wonder how this is going over with the population.”

“Then I must remember that it won’t end with gay marriage. Liberals will always push boundaries to new obscene levels and sell their queer ideas, particularly to kids and teenagers, or anyone too soft to stand up against “tolerance”.”

“There is a silver lining here. Use it for statistics for counting gays in the population. If they say it isn’t representative because gays don’t get married in large percentages, then we have the situation that most don’t really want to live a “normal” middle-class lifestyle, as the activists often claim.”

“there just aren’t enough gays in this world to justify all the bullshiot they are getting away with, something big must be slipping by, but what?”

“That’s no silver lining. Besides, gays are made, not born. Their numbers will increase with all this outreach. Why? Because of human depravity and arrogance that ignores the laws of nature and nature’s God.”

“Adult-Child “marriage” is next.”

“So what happens when British moslems start complaining? Won’t the UK have to backtrack to show how pluralist and tolerant of other cultures they are?”

“I’m sure normal marriage will survive. Yet, the combination of all other types of Unions will probably start creeping out of the woodwork. Man-Boy, Man-Dead, Woman-Animal, etc etc. Who are we to prevent the old Europe from this illness.”

“Oh, the American Psychiatric Association (APA) removed bestiality from its list of mental diseases a few years ago, claiming that animals and humans could share long-lasting bonds of love that transcended just sex. It’s just a matter of time. These perverts and their “tolerant” and “diversity” loving buddies know no ends. Everytime I hear either of the above two words, I want to vomit.”

Then, I found this hysterically unhinged “Vanity” piece up there, so horrid that even the Freepers deemed this poor feeble soul a troll….

Why I think homosexuals are stupid

1. An inability to figure out what sexually dimorphic species implys.
2. Obsession with perverted sexual behavior.
3. Ask yourself why every homosexual posting to this site turns virtually every subject thread to homosexual behavior discussions, homosexuals are victims, help homosexuals fight “bigotry.”
4. Claiming that the Will and Grace show is what the homosexual lifestyle is all about.
5. Ah, AIDS is a disease associated primarily with aberrant behavior.
6. A million cases of AIDS in U.S. and they haven’t seem to figure out why??
7. The placement of one’s sex organs in another same sex’s excretory routes.
8. Aberrant practice of fisting, rimming, felching, and odd behavior of placing rodents in rectums.
9. Claiming that people who are disgusted with said aberrations are somehow terrified of said behavior–homophobes. This idiotic notion implys that those supporting homos are homophiles.
10. Membership in NAMBLA
11. Homosexuals deserve rights above and beyond others because people oppose their perverted behavior–they call it “hate crime legislation.”
12. Homosexuals consider having a lethal venereal disease a badge of courage– what an accomplishment.
13. Most male homos want to molest young boys–aka–the NAMBLA recruitment technique mastered by the leaders in the movement.
14. Claiming that the hundreds of homosexual priests that raped young boys were really pedophiles only, not homosexual molestors or pederasts.
15. Claiming their lifestyle is “natural and normal” while those people disgusted by it, are called “abnormal.” Admittedly, normal folks dumb enough to believe this should probably be reclassified as stupid.

I’m sure you all could come up with 15 reasons Why Freepers are Dumbasses without breaking a sweat. The reaction from his peers?

“I agree with most of what you said except they aren’t all stupid. You can be smart(ish) and immoral at the same time. Granted, homosexuality is a stupid act, but some of the people who do it are very cunning. They have been brilliant in their marketing of this evil. If anyone is stupid it’s the people who are buying what the gay activists are selling. And then there are the cowards who just won’t speak up, even when their own children are being corrupted by this stuff.”

“This is the sort of thread people post on Free Republic so they can point out to others how “intolerant” FReepers are. Begone, Troll!”

“I don’t disagree with most of what you say, however, they are spreading the death warrant of AIDS at record rates. This is being stupid to the public health risk of self-destructive behavior, IMHO.”

A double dose of the Freepi